Posted By: BelltownPeople Archives May 23, 2009 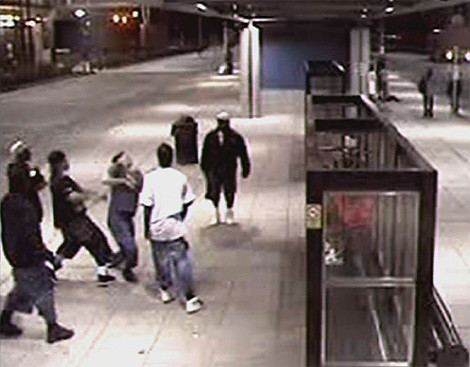 Two people were arrested early this morning after they allegedly attacked and robbed a bicyclist at Third Avenue and Pike Street.

At 1:47 a.m., the bicyclist was taunted and then assaulted by a group of males and females at Third and Pike, according to Seattle police. The assailants took the man’s bicycle and helmet. A passerby was able to retrieve the bike and return it to the victim.

When the victim approached the group of thugs and asked for his helmet back, one of them pulled out a stun gun and threatened the victim. Police stopped the group of suspects at First Avenue and Pine Street. Two were positively identified, although more were involved. Officers recovered two stun guns.

Two males — a juvenile and an adult — were arrested for investigation of robbery.

I’ll just out and say it. Downtown, in this exact area, has a huge problem with teenage thugs loitering after they presumably get out of school. People are lined up on the streets just hanging out. But, as a realist, there’s nothing that can be done about this problem. What are the cops supposed to do, run day care centers for the imbeciles that think downtown is “cool place” to hang out? Maybe they ought to follow through on the plan to pump classical music downtown?

3 Comments on "Your “What the Hell?” Weekend Moment…."