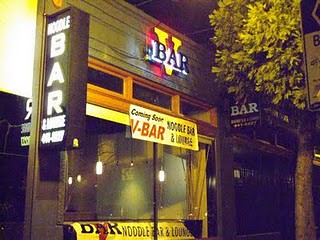 I haven’t heard if the food is worth risking personal injury for, but apparently as soon as a fight starts inside the restaurant, staff moves quickly, and forcibly pushes everyone out the door, even people not involved in the fight. One innocent bystander  was knocked unconscious this past Thursday according to the police report.

Once Police showed up, the “owner” refused to let them enter the establishment even though a patron was knocked unconscious inside. The owner allegedly continued to provide a false name, and also lied about what happened.

Read the full report after the jump…

disturbance in the entry to the V-Bar located at 21 2 Av in Seattle.

Sgt. Kraus was driving by and saw a group of primarily Asian males pushing

and fighting in the recessed entry area. The fight appeared to extend

inside the business as well. Due to the number of combatants additional

told him there was a fight going on inside. A large group of combatants

When Sgt Kraus attempted to locate combatants or victims, the employees of

the bar intervened and attempted to refuse officers entry into the bar,

which still contained patrons. When questioned, the

, insisted that there was no fight and no victim inside and tried to

began to yell at Sgt. Kraus that he couldn’t put that on them, and

denied any connection between the V-Bar and violent actions. A women

Sgt. Kraus also insisting that she was not responsible for any of the

violence that took place on the sidewalk. Sgt. Kraus attempted to explain

doorway. The owner began to wave her hands in Sgt. Kraus’ face in a

threatening manner and yelled over him, refusing to listen to his own first

hand observations. The owner then yelled at Sgt. Kraus to “Fuck Off” and

a customer from the bar approached Officers and said that his

friend, had been assaulted severely enough inside the bar that

he was knocked unconscious during the violence. had been pulled

inside and put on a couch. Employees tried to conceal from

responding officers, and repeatedly denied that any assault or injury had

to hinder treatment to an injured customer, who had been assaulted inside

the business, and were attempting to hinder law enforcement from

write an incident report. The owner told me her name was ” I asked

her for her last name and she said, “Just refusing to identify

herself to me. I told her I needed to write an incident report and needed

it with two . I asked her for her full name and she refused to provide

it to me, telling me I didn’t need it. I told her that I was sure liquor

control board would want to know who was present and I needed her name.

She told me again ” . I told her that since she wouldn’t provide

the information I asked for I would need to see her ID. She went into the

bar and then attempted to refuse me entry into the business. I pointed out

Liquor control board, and that there were customers still inside, including

the injured victim, so I could and would legally enter the bar and would

remain with her until properly identified. The owner finally provided her

ID, and I found that she had provided a false name. The person identifying

herself as the owner was

and swelling to the right side of his face, he had regained consciousness

but was still disoriented and had obvious swelling to multiple contusions

disturbance inside the V-Bar, and that staff began to push everyone toward

the front door in a wild push, combatants and non-combatants together. Due

to the small front door this compressed the violence and innocent

interviewed separately confirmed that the violence had started

inside the bar, and that staff pushed everyone together to the exit, and

the combatants that were already fighting when staff pushed the

non-combatants together with the fight.

both and admitted that they knew

the fight had started inside, and that victims had been injured inside.

They refused to explain why they had obstructed the police investigation

and delayed aid to the injured victim. Both and told Officers

the whole place videotaped. When Officers asked to review the video they

said that they had cameras but none of them were on or recording. 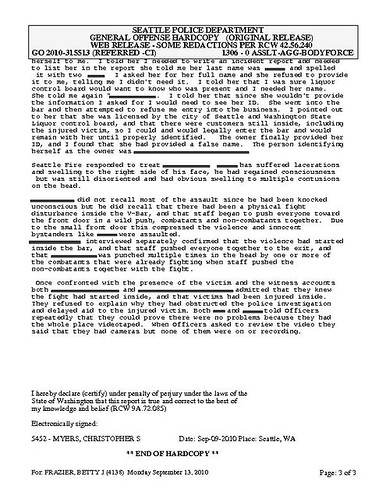