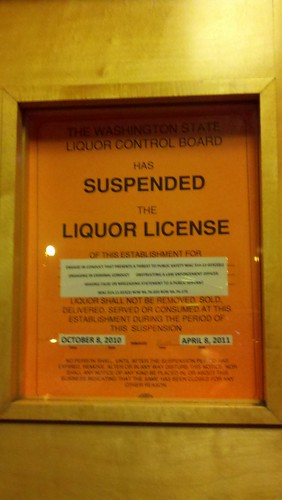 You may remember a few weeks ago, we posted the story that V Bar may be facing possible license suspension.  Well, today the liquor board made it’s decision; the orange sign in the window states the State Liquor Board has suspended V Bar’s liquor license Until April 8, 2011, effective immediately.

In addition, the State will have another court hearing to determine if the bar should lose it’s license permanently.

From the PI’s story:

“They had some obstructing issues against some of the officers, and also the licensee’s actions (were) taken into consideration – what her actions were, providing false and misleading statements, obstructing officers from entering,” said John Northhorn of the Liquor Control Board.

Northhorn said the bar staff “also failed to identify that there was a victim in the establishment that was unconscious at the time,” and responding officers weren’t aware of the situation until patrons alerted them to it.

“Until police were notified by other patrons, we had a 10- to 12-minute delay in medical response for this individual,” he said.

It seems Belltown may actually be seeing the positive effects of  Mayor McGinn’s Nightlife Initiative.  Perhaps other Belltown bars will take note that this administration is taking liquor violations seriously.

I was able to snap a picture of the notice as I was walking on 2nd, but had to laugh when I noticed V Bar still had a sidewalk sandwich board stating their alcohol specials.