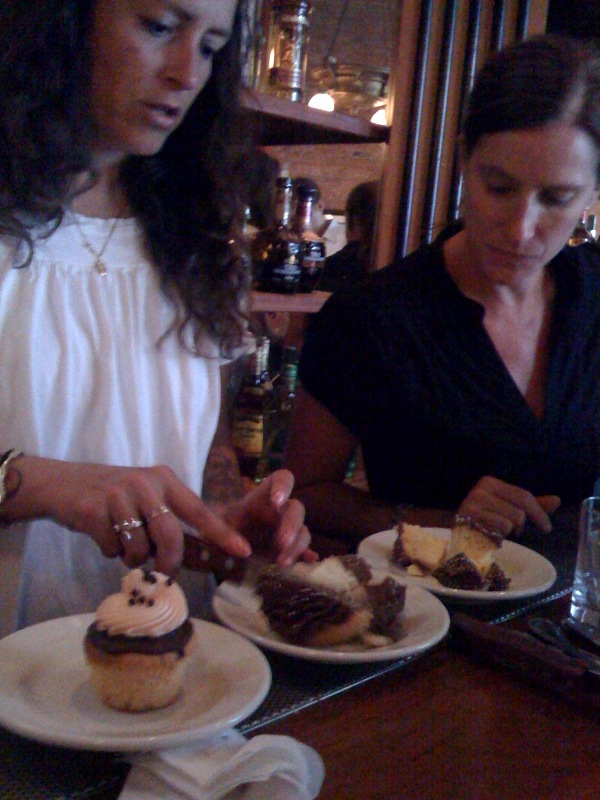 In an attempt to uncover Seattle’s hidden fame for having the best cupcakes on the west coast, a group of Seattlites organized an underground cupcake-off held at Belltown Bistro last week.  The challenge for this competition included finding a group of volunteers that were able to traverse the city, find various cupcake bakeries, and purchase an assortment of their cupcakes.  All of this work to yield an overall assessment of presentation, function, and taste of the products.  A total of six bakeries were identified and unsuspectingly had their products entered in a cupcake-off competition.  The bakeries included Trophy Cupcakes, Macrina Bakery, Dahlia Bakery, the well renowned Cupcake Royale, the new kid on the block – The Yellow Leaf Cupcake Company, and the Sugar Rush Baking Company.

results after the jump…

In an overwhelming vote, coming in at a tie for last place lay the most prominent of Seattle bakeries: Cupcake Royale and Macrina Bakery.  Although Cupcake Royale had the second best cupcake carrying box, which included a see-through viewing window, average box sealing functionality, and made great use of the phrases printed on the outside of the box, this still was not enough to pull them up to the top of the pack. 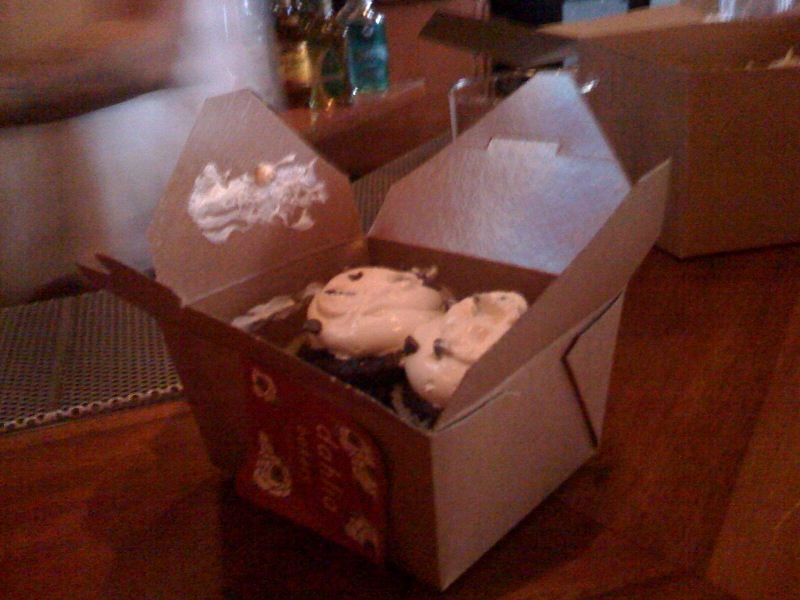 The cupcakes evaluated included their classic white cake-vanilla frosting with sprinkles, Chocolate Peppermint Party, and vanilla cake with lavender buds in butter cream. During the event one of the most common remarks heard from the judges included “very very dry”. In addition during the tasting of the Chocolate Peppermint Party the cupcake fell apart yielding other statements such as “this is not safe for the car” and “this one is a dirty joke”.

As for the Macrina Bakery their carrying box had no cupcake holders, which allows for cupcake shifting causing damage and less presentable products.  The cupcake sampled included a chocolate cake with white frosting with blackberries on top.  According to local rumors it is said that they producing dry cupcakes, which may be caused by freezing their cupcakes. This can happen to them upon thawing.  With the cupcake tested the cake was definitely opposite of the rumors as the cake was tested to be moist. They may be redeeming themselves from the frozen rumor mill.

Next up on the list is Dahlia’s Bakery. Many were disappointed in Tom Douglas for the first sample taste of the chocolate cake-vanilla frosting cupcake, and that there were no cupcake holders available in the carrying box. There also seemed to be too much cocoa powder in the cake causing a “burnt” taste and was too overpowering. Most judges couldn’t finish the sample. On the upside, this bakery did provided a yellow (with some type of seed) cake with vanilla frosting. This sample was a hit with the bartenders from Belltown Bistro (Jeannie, Gaylnn) as they started dancing with excitement and saying “it tastes like cornbread” and “get your corn on!!!”.

It’s now down to the top three competitors. Arriving in third place is Trophy Cupcakes. In the carrying box category they were able to supply cupcake holders and have one of the best logos on the box. They also had a wide variety of desserts to choose from. The cupcake that did it for this bakery was the chocolate-chocolate which included bittersweet Belgian chocolate and French chocolate sprinkles. This one definitely had a nice balance of cocoa powder in the mix. In the solo cupcake arena they offered a red velvet cupcake which included a hint of cocoa powder and was toped with a cream cheese frosting. The cake itself was a little dry and messy, but the cream cheese frosting drove a newly desired taste with the different frosting combination. Overall it was not enough for the judges to send this bakery to the head of the line. A third cupcake sample included a vanilla-vanilla butter cake with Madagascar bourbon vanilla butter cream. Wow can you say this description ten times in a row? They added sprinkles, which added a crunchy sensation to the eating experience and had a somewhat moist cake portion. 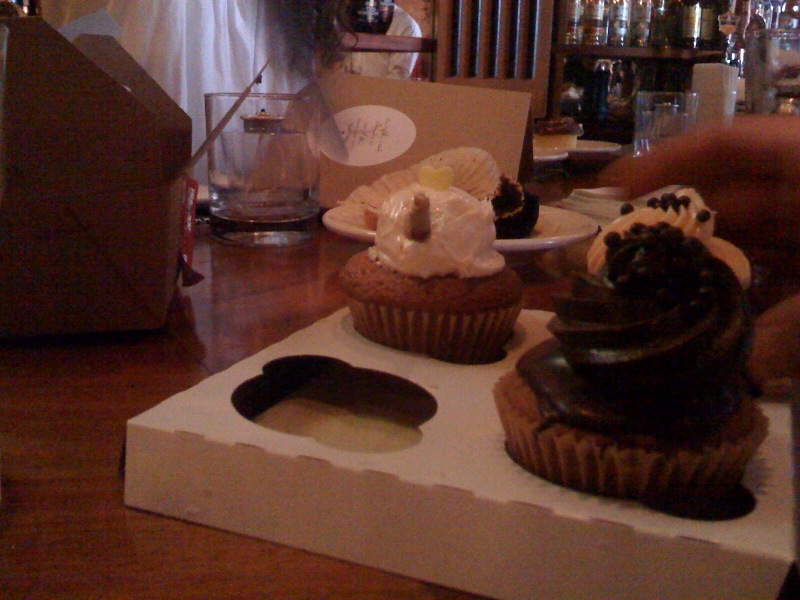 In the number two spot from West Seattle we have Sugar Rush. Although they did not place that high in the carrying box category and didn’t have a cupcake holder, they did have some great tasting products. Their Enjoy Mint-chocolate cake and mint butter cream was able to produce a nice cut, stable, and uniform cake that stayed together. One judge refereed to this as “sugary goodness”. Cupcake Royale was able to produce a similar cupcake but this one took the prize hands down. The down side to Sugar Rich came from their vanilla cake and chocolate frosting. The judges here deemed that the frosting came from a can and seemed “almost Betty Crockerish”.  The best cake that was sampled from this bakery was the Baby Flake-white coconut cream cheese with coconut flakes. The flavor here was true to form and had a light frosting.

Taking First place in the First Belltown Underground Cupcake-Off is Yellow Leaf!!! They are the newest kid on the block. They had the best carrying box and had a nice seal and closure design. They were also able to produce a similar mint cupcake such as Sugar Rush’s, but their only error here was that they had a heavier frosting. Does this mean more calories? Yellow Leaf has a signature tomato soup cupcake. The initial reactions were not that good citing that it was a bit too spicy and overpowering. However to bring them to the top they have an Orange Chocolate Solo cupcake that drove the judges asking for more. This cupcake looked like “Valentines day in a box” and was “beautiful and gorgeous at the same time”. No wonder why this was a solo entry, the look and taste was unmatchable. They were also able to provide a root beer float cupcake, yup, it actually tasted like a root beer float and it even had a tasty edible straw! The presentation of this one was top notch. 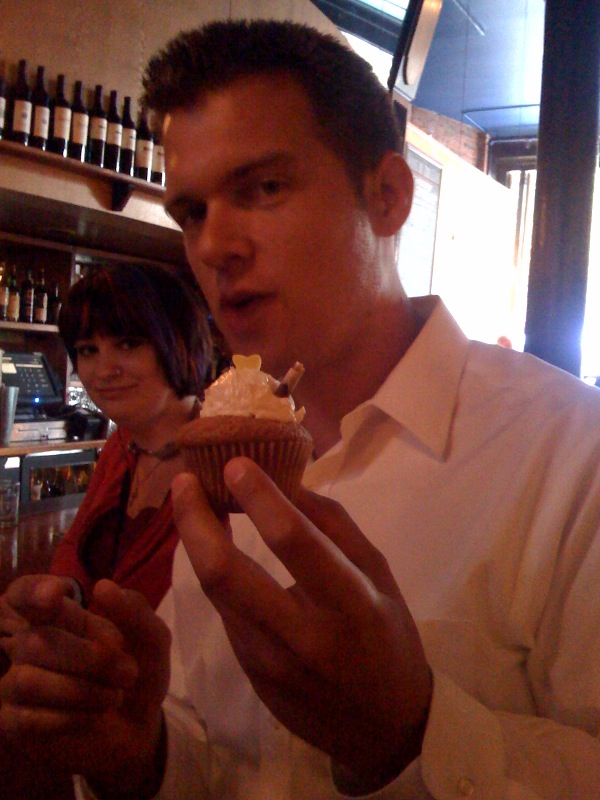 Overall the top three (Yellow Leaf, Sugar Rush, and Trophy) were close, but Yellow Leaf definitely took the care and dedication to pay attention to the details, even in the packaging. Sometimes the bakery will also offer a 40% off discount for the last call on their cupcakes. They don’t do it everyday, but when you can catch them around closing time (5:00pm) you can surely catch a good deal.  For fairly being new to the cupcake arena they performed very well. Time will tell if they become the next big hit in Seattle and in Belltown to eventually take a larger surrounding “Best Cupcakes” title. If there are any other Seattleites that want to conduct a Cupcake-Off or other tasty food challenge lets put something together and see which vendor arrives at the top! 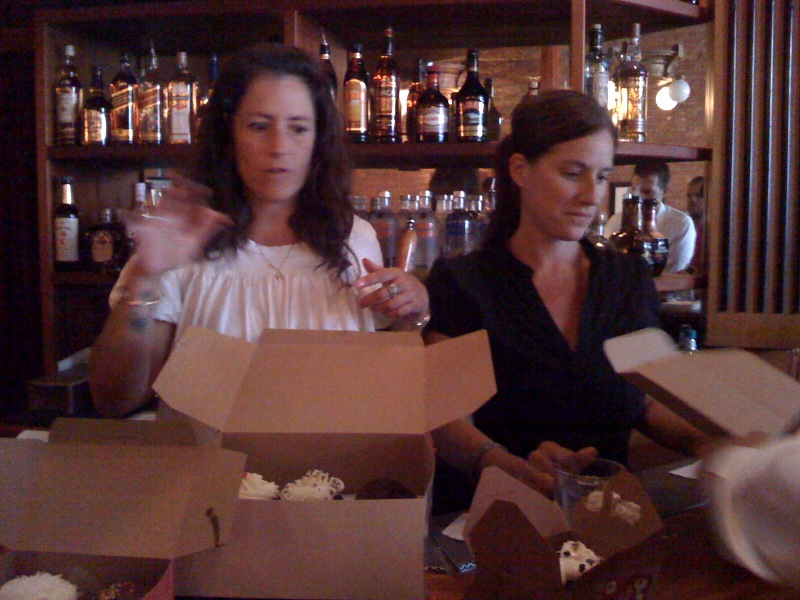