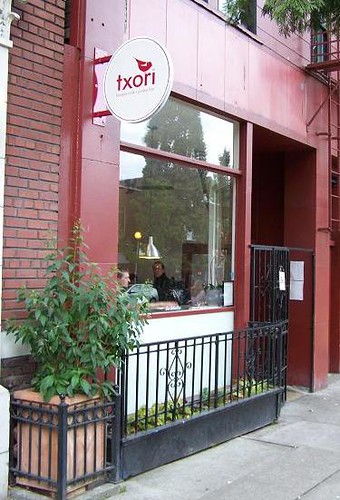 Txori, Belltown’s much beloved tapas bar, is saying goodbye April 19th. Unfortunately, this doesn’t seem like cruel April Fool’s joke, but rather just a comment on the continued evolution of the neighborhood.There’s a silver lining amongst the news. The space will be transformed into a new tapas bar – Pintxo. That gives us all a “little something” to look forward to.

A Letter of Farewell

Dear Friends, After nearly 2 ½ years of continual flight, my beloved little Basque bar, Txori, is going into hibernation. I say hibernating rather than closing because after a restorative rest and an improved economy I hope to begin looking for a new nest for my little bird at the end of the year. Our final txoko dinner (see below for details) will be this coming Monday, April 5th. Our final day of service at our Belltown nest will be Monday, April 19th. Business as usual will continue at my other restaurant, The Harvest Vine; I hope you’ll join us in the coming weeks at Txori and into the future at The Harvest Vine.

But don’t despair Belltown will not be left pintxo-free. In fact two of its own residents, right from the neighborhood, will be taking over the jewel-box of a space on April 21st and reopening shortly thereafter as “Pintxo”. C.J. Chaney and Corey Chigbrow have been patrons and fans of Txori as their neighborhood place. Having met while working for Myspace several years ago, they believe in community in both the virtual and physical worlds. They share with me the joy of bringing people together through food, understanding that the connections forged over a bite and a glass are like no other. I hope that you will welcome and support them as I have. In time perhaps Seattle will support a tapas bar on every street! (My personal mission…)