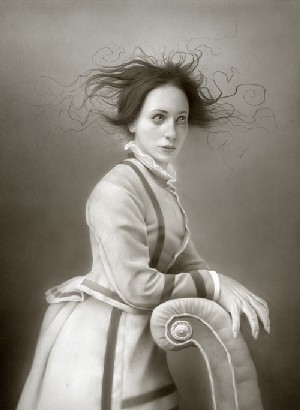 Straight out of Queens, New York, Travis Louie has collected inspirations for his Victorian and Edwardian era monsters from 1950s Sci-Fi and Horror films and from the lighting effects and atmosphere of the German Expressionist and Film Noir movies of the Silent Era to the late 1950s.

Drawing from his vivid imagination as well as his fascination with oddities, circus sideshows, old Vaudeville magic acts and Victorian portraits, Louie has created a universe of art all his own and has won over many fans in the process.

Travis Louie’s latest exhibit, “Portrait Of The Artist As A Young Monster,” will open at Belltown’s Roq La Rue on Friday, August 21.  Running through September 5, the exhibition will feature eight larger scale works with Louie himself on hand at the opening for a signing of his book Curiosities, also available at the gallery.

A master of the “portraiture,” a blend of hyperrealism and the completely unreal, Travis Louie is an artist not to miss.  With only a two-week long exhibition, be sure to stop by Roq La Rue for an unforgettable collection of pop surrealist art.