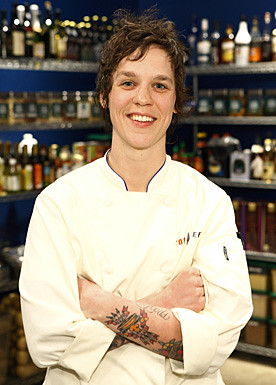 TheStranger took some time to interview Top Chef contestant Ashley Merriman. If you’re a fan of the show, this is embarassingly old news. However, if you’ve tossed your TV in the dumpster a long time ago like me, you’ll be delighted to know that Ashley is the executive chef of Belltown’s very own Branzino. We’ll be rooting for Ashley and rumor has it that she’s in the final top four.

The interview also reveals some bittersweet news. It looks like the opportunity on the show has at least helped to open some new doors in New York. As such, Branzino will be looking for a new Executive Chef.

What’s it like to watch the shows for the first time?

It’s pretty horrifying. I never really thought that I would do this; it’s not really my style. It’s a very invasive process… Initially, I was like, “No way am I doing that.” Maria Hines [of Wallingford’s Tilth], my mentor, encouraged me.