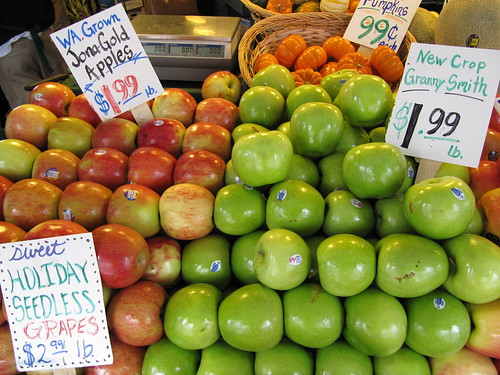 While hosting family in town last year, my sister-in-law and I picked up some fruit and veggies at Pike Place. The “nicest man” helped us pick out delicious goodies, some things we had never even heard of. He gave us recommendations, was happy to give us a sample of something random and juicy, and even helped to point out the ripe produce for us when we couldn’t tell. (I don’t know about you, but staring at fruit and wondering what it looks like inside is always a challenge for me.) We spent 30 minutes bopping around that stand, having great conversation about produce and recipes with the “nicest man” who happened to work at this produce stand. When we were done we had spent a bundle and had so much fun doing it. We left and walked across the street to see the fish being thrown around and after watching for 5 minutes or so, we felt a tug on our hair, it was the “nicest guy” here to give us our bags and bags of produce that we’d somehow forgotten!Dough’p! We sure felt stupid.  He looked around for us, spotted my sister’s big head of blonde hair and saved the day. It would have been horrible to get home without our intricately picked out produce!

I didn’t know very much about picking out fruits and vegetables. I had no idea what was in season, and had no idea what to do with things like leeks (which are great in corn chowder and frittatas by the way) and even what the difference between a Ranier cherry and any other ol’ red cherry was(I still don’t think I know that one). This nice man who made my produce shopping less intimidating and who was filled with knowledge about all things produce, always stuck out in my mind. And every time I’d walk past this stand he’d be chatting and helping out someone in the same way he did for my sister and I. So….. I decided that he would be the very first person featured for this “Pike Place People” version of Pike Place Stroll on BelltownPeople.com (say that really fast a few times)!! For most Pike Place Strolls we will tell you about some delectable unique shop, but for special ones, we will feature the special people who make this Market our neighborhood market and not just the infamous Pike Place Market. 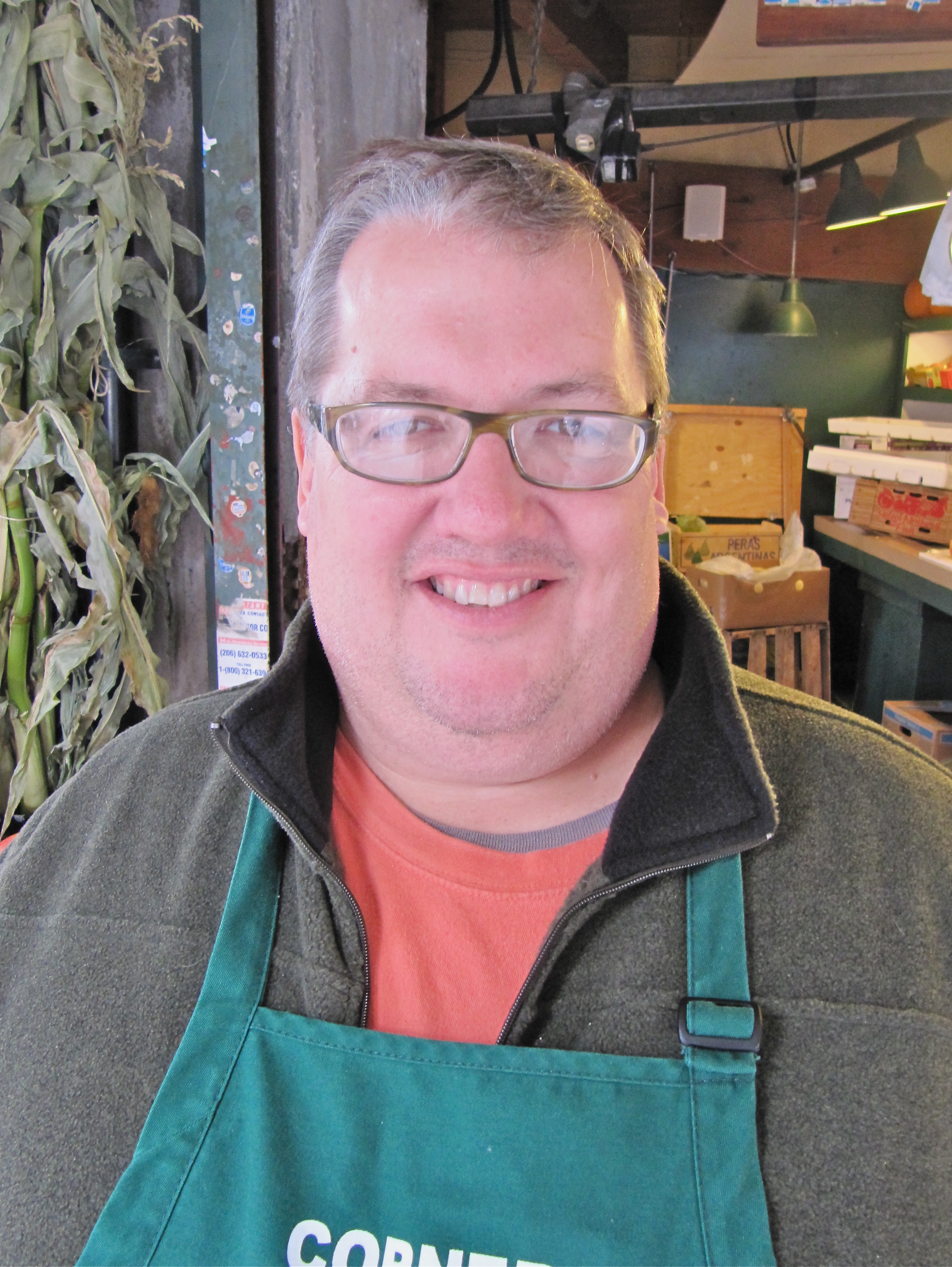 Meet Brian Bright! The “nicest man.” He grew up in Eastern Washington farm country and has worked at Corner Producefor the last three years. He loves being able to meet all different kinds of people from all over the world. He said jokingly, “I don’t need to travel, people from all around the world come to me”. When I asked him, “quick response: What is your favorite fruit or veggie that you get excited about when in season,” he proceeded to give me a long list of everything yummy in season. At the moment, I thought it to be a good salesman. But if I were him I would have a long list of every season’s delicious treats as well…I mean honestly watermelon does not sound appetizing right now in the 40 degree weather. But a warm baked apple dessert does! I think that was the case with him. He seemed to sincerely enjoy what he does. No bullshit sales ploy here. Mind you, for the interview, I did walk away with a few bags of Brian picked out produce, but really enjoyed having conversation with him all the while.  Here’s Brian: helpful, sweet, cool to chat with, filled with produce knowledge, a guy you would want to be bros (friends) with, a true gem to us locals at the Market. Because of Brian, I will make Corner Produce “my” produce stand at The Market. I mean the stands pretty much sell all of the same things anyway. The relationships/community are what make the difference in where I will shop, in my book. The produce at this stand mostly is all from the Pacific Northwest, so whatever is in season here will be what you get to choose from.  Also, for the locals…this shop is especially great because it is open from 6am-6pm and you don’t have to walk through the whole market sea of tourist crowds to get there. From Belltown, I stay on First Ave until I get to Pike and then cut right at Pike. It’s the second stand on the right. Tourists avoided. 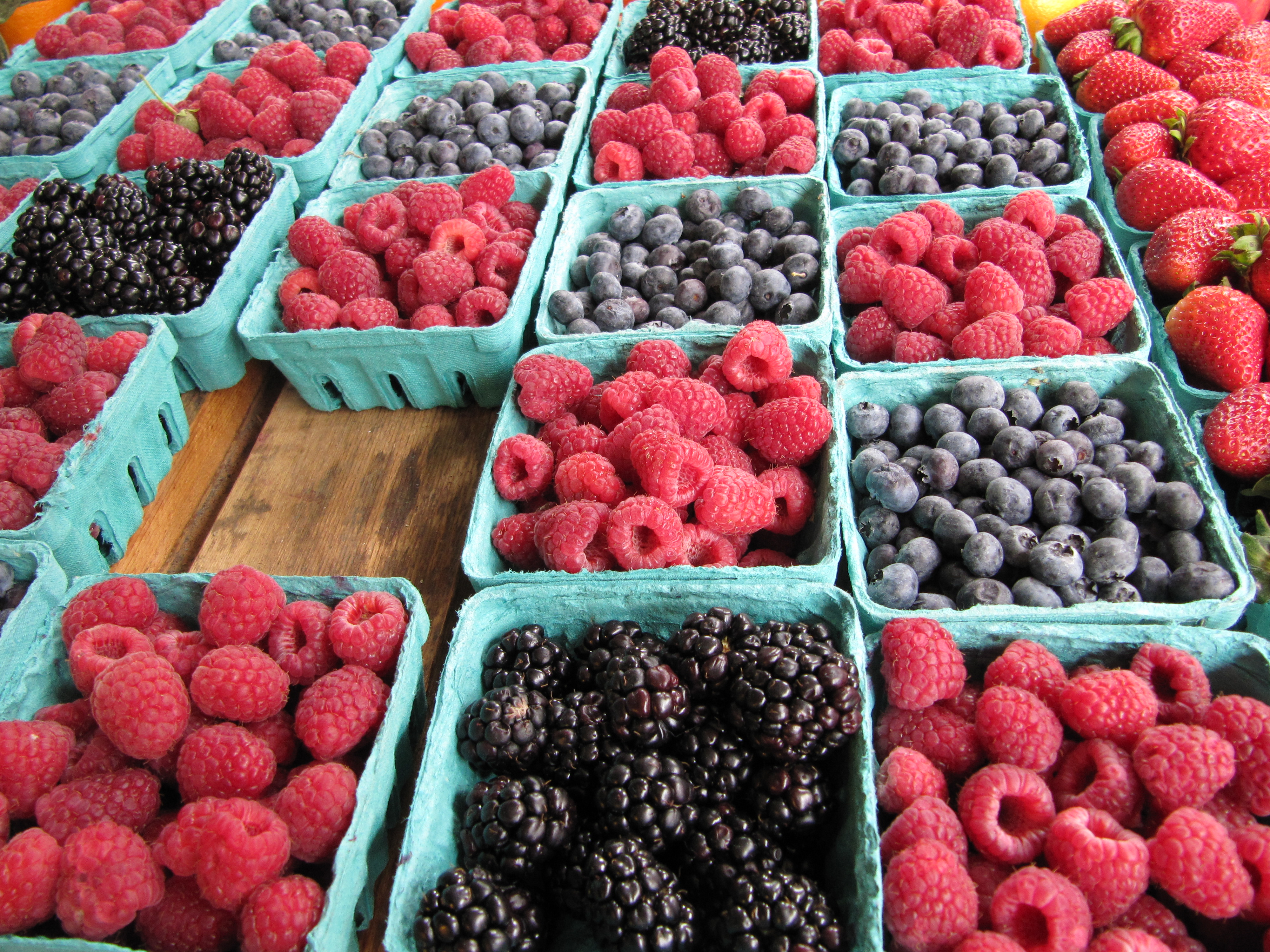 Lastly, I asked Brian what his favorite stand at the Market was, as someone who really knew the market, so that I could do my next interview on his recommendation. And he told me the Filipino restaurant around the corner washands-down his favorite. Family owned and operated for years, amazing food. Imagine how funny that was when I just heard the same recommendation from my UPS guy that I ran into while he was walking out of that stand with to-go boxes in his hand just 20 minutes prior. More to come on this restaurant for our next edition of Pike Place Stroll….next week! In the meantime, stop by corner produce, say hi to Brian and get some great local produce.  Thanks Brian for being a part of this community and for making Pike Place Market feel a little bit more like our neighborhood market.