Capitol Hill Seattle Blog tips us off to a lot of action flick drama unfolding across the neighborhoods this week. Police released details of “Operation Big Slick” (who names this stuff?) which purportedly knocked out an underground casino and drug dealing operation. No small potatoes either; the drug bust was apparently worth over $200,000 in cocaine.

Ultimately, Wilson joined with other conspirators in order to obtain the location (beginning April I, 2008), open the establishment under the guise of a legitimate business (known as the Free Sheep Foundation), and operate another illegal gambling enterprise

Furthermore, there might be some broken hearts in the arts community. DK Pan and Eric Sun, some of the masterminds behind the Free Sheep Foundation are directly implicated in the police reports.

An undercover Seattle Police detective (UCD) went to the “Cafe (Un)American” where the UCD met DK Pan, Ben Sharp, and Eric Sun, among others. These subjects indicated that the cafe was closing due to recent police attention and publicity, but that the gambling was relocating to its former location, known as “The Yard” or “Rick’s Place.”

The certainly look like some brazen AK-47 wielding menaces to society. I found their “mug shots” on the notorious crime network of facebook earlier this morning. 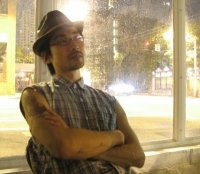 If you’re interested in catching up with the Free Sheep folk, they’ll be in town tomorrow night to turn the Moore inside out. If you’re lucky, bring your best game of Texas Hold’em. Might be the last chance you’ve got.