Posted By: BelltownPeople Archives May 7, 2012 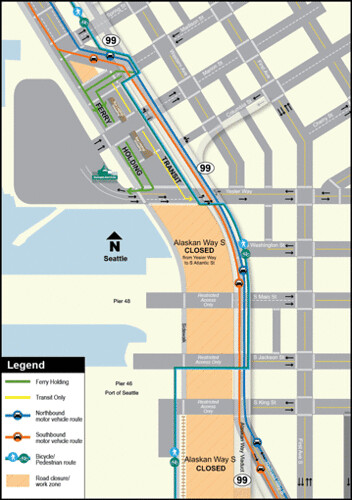 It’s not yet time for the downtown waterfront’s big makeover, but it is make-room time for the State Route 99 Tunnel project. Crews clearing space for tunnel construction are preparing to reroute six blocks of waterfront traffic from Alaskan Way to a newly improved road beneath the Alaskan Way Viaduct.

The traffic switch – which will happen Wednesday evening, May 9 and last through at least early 2014 – will change ferry access as well as parking and traffic patterns along the waterfront south of Spring Street. A detailed map of the changes, along with a drive-through simulation that shows new routes to the ferry terminal, is available on the program website.

Moving traffic off Alaskan Way allows crews to expand the tunnel work zone north to Yesler Way. The space will be used to prepare the ground beneath Alaskan Way, where the project’s tunnel boring machine will begin its journey in 2013.

The Washington State Department of Transportation (WSDOT) and the city of Seattle are teaming up with several waterfront businesses, restaurants and parking operators to offer up to four hours of free parking between 9 a.m. and 7 p.m. on Mother’s Day, May 13.