Good news Seattlites, The city has decided to spend some more money fighting crime in downtown Seattle! Pop Quiz  – What are the big crime issues you’d like to see attacked?

D) Unfortunately, they’re spending over $160,000 on lining the city’s pockets with parking tickets instead of fighing real crime. I don’t normally go on rants against the government on this site, but this is worth talking about.

From the Seattle Times

Two sedans packed with $160,000 worth of special software and equipment will prowl the streets, taking pictures of license plates and the position of each vehicle’s tires. A later, second pass will automatically reveal which cars haven’t moved, resulting in a quick $35 ticket. 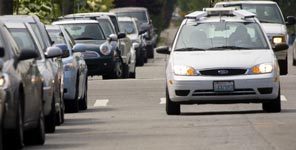 Where does the city get off spending this kind of money on basically the harassment of it’s citizens when time and time we’re told there’s no money for additional cops to patrol the streets. Between this new robocop endeavor and the bait and switch tactics soiling 1st ave, it’s really beyond me to understand the valorous underlying goal behind this program.