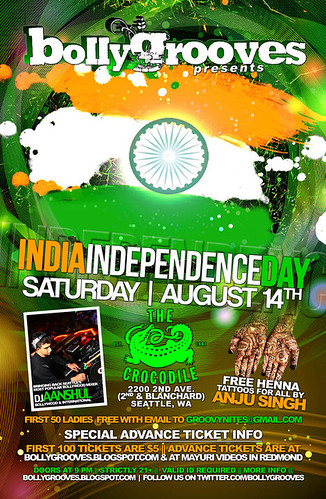 On August 14, 2010, The Crocodile will host an energetic night of popular Bollywood and international music to celebrate India’s 64th year as a sovereign nation.

The public is invited to this lively event presented by BollyGrooves to mark the anniversary of the end of British rule in India, which took place in 1947. Join in at The Crocodile to commemorate India’s holiday of new beginnings with a night of music, dancing and inspiration.

Headlining the show is DJ Aanshul, an influential artist known for his versatile performances of blended Bollywood and international music. The night will be interspersed with Indian Independence Day-themed songs and the festivities will include free henna tattoos by local mehndi and henna artist Anju Singh and free admission pass giveaways to future BollyGrooves events.

“Independence Day is such a fun and cheerful occasion within the Indian community,” says Shelly Kamran of BollyGrooves, the event’s sponsor. “We’re excited to share the experience of music, dance and Bollywood with the broader city of Seattle.”

“Long years ago, we made a tryst with destiny and now the time comes when we shall redeem our pledge… At the stroke of the midnight hour, when the world sleeps, India will awake to life and freedom.” -Jawaharlal Nehru