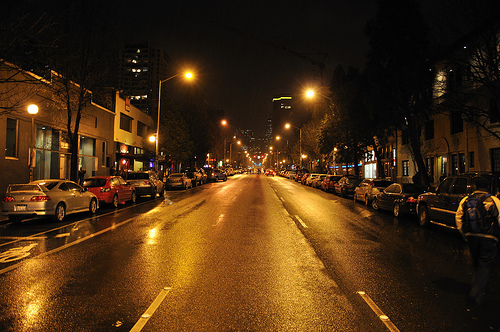 Seattle Times’ Tan Vinh has experienced a sudden longing for the “grungy” days of Belltown’s past;

Belltown is polished now for the pretty people to bar hop on Fridays and Saturdays. Used to be grungier and edgier. Used to be more casual — in dress code and in attitude. Used to be more graffiti on them walls, too. No one’s got time for that now.

As one panhandler said, “it got money” now.

That’s funny Tan. I didn’t know you were such a connoisseur of  “grunge”. For instance, your recommendation of the Cheesecake Factory’s $5 happy hour?  Come to think of it,  Tavolata, Via Trib, and Palace Kitchen?

Thanks for swinging by the locals favorite strip of 2nd avenue. It’s easy to miss – just like the big picture of Belltown’s diversity. Belltown’s “grunge” is alive and well. What other neighborhood has the diversity of Belltown? 1st & 2nd ave might as well be different hemispheres on Friday nights.But, they’re not – just a block apart.

It’s ok. We won’t hold it against you. But, just try not to throw the whole neighborhood into one big messy bucket of make believe culture clashes.