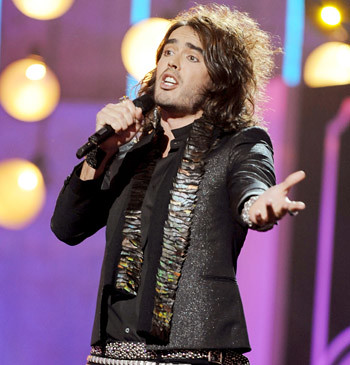 More big comedians are on duty to brighten up the Emerald City.  Besides Chelsea Handler just a of couple weeks ago and Conan O’Brien coming up in mere days, Russell Brand and Janeane Garofalo are also scheduled to leave their signature on the comedy circuit as they roll into Seattle this spring.

The Moore Theater will house both big names, as Russell Brand is first to arrive.  The British dandy, who officially made a name for himself stateside after hosting the 2008 MTV Video Music Awards, has a long and controversial career including his first presenting role as VJ on Europe’s MTV, where on September 12, 2001, a year after beginning the stint, he came to work dressed at Osama Bin Laden with his drug dealer in tow.  It is this type of behavior that has garnered him fans as well as raised eyebrows.

Still, many are more familiar with Brand’s movie appearances in films such as 2008’s Forgetting Sarah Marshall and Adam Sandler’s Bedtime Stories.  As of late, the biggest source of press comes from his recent engagement to pop star Katy Perry.  Russell Brand will be appearing at The Moore Theatre on Friday, April 23 at 8pm.  Tickets are $33 advance or $35 day of.

Janeane Garofalo, known for her deadpan delivery, self-deprecating style and slightly disheveled appearance, is an American comedian, actress, activist and writer.  Having started her stand-up career in the late 1980s, she quickly jumped into television with a short-lived debut on The Ben Stiller Show, followed by the character of Paula on The Larry Sanders Show, which won her two Emmy Award nominations.  In the mid-90s Garofalo was a cast member on Saturday Night Live and also found success in films including Reality Bites with Winona Ryder, The Truth About Cats and Dogs starring Uma Thurman and Romy and Michelle’s High School Reunion.

At The Moore Theatre, Janeane Garofalo will take the stage twice in one night on Saturday, May 8

at 7pm and again at 9:30pm.  This presentation will be a live DVD taping for Garofalo and will feature special guest Kyle Kinane.  Tickets are $18.

So many comedians, so many styles.  Conan’s classic late-night talk show style, Brand’s outrageous observations and Garofalo’s sarcastic wit, to name just a few funny people entering the city limits, are sure to fill up the seats and hit the spot for every type of humor.