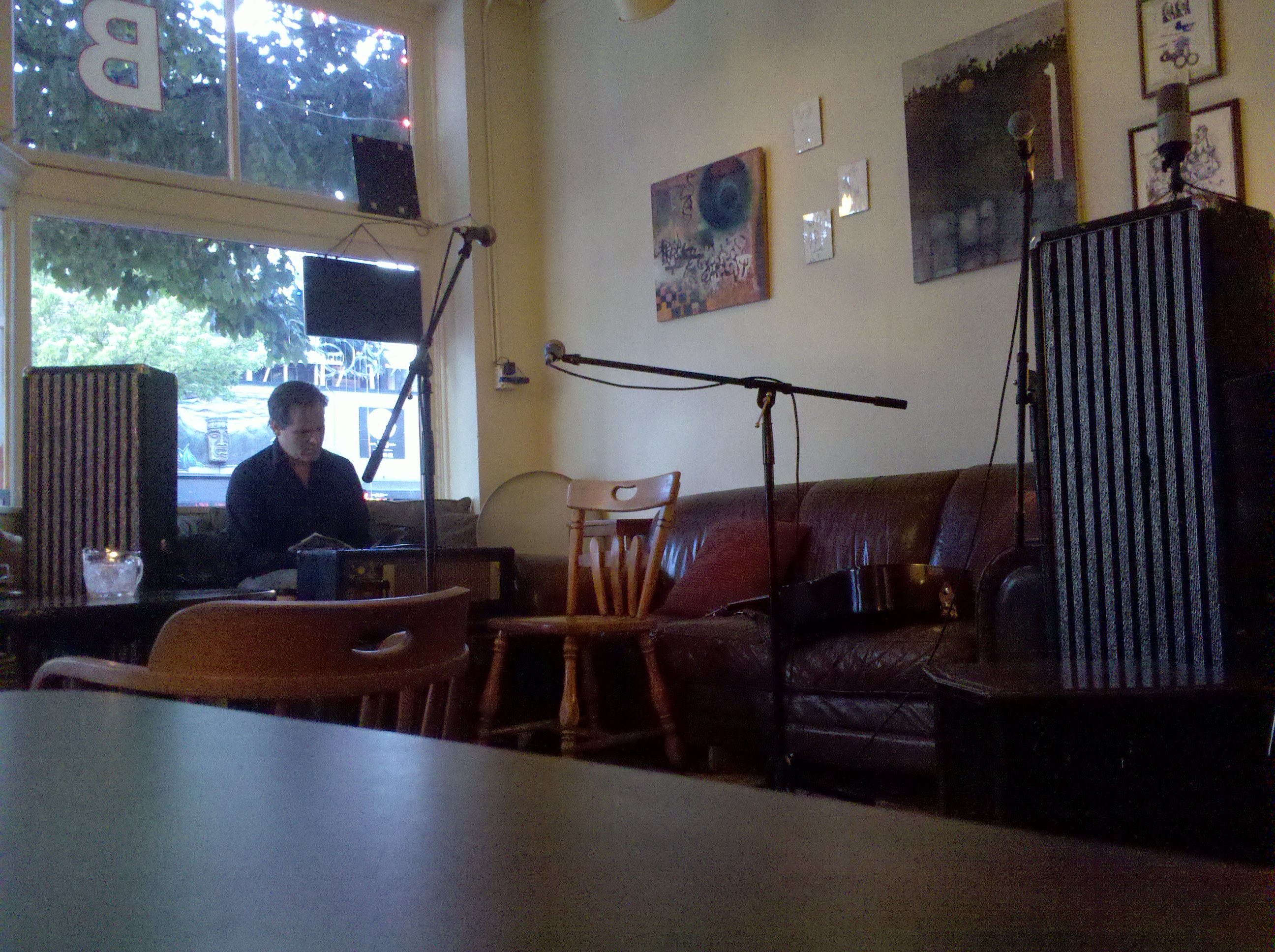 Last night I went to check out Radio Bedlam. If you haven’t already heard, Radio Bedlam is the Tuesday night open-mic extravaganza put on by the guys at Bedlam Coffee.

If you haven’t been to Bedlam yet, 1) shame on you, and 2) you should go! What I love about Bedlam is that it has its freedom to be fiercely local and decidedly Belltown. It reminds me of the coffee places back home in Nebraska where you could chill or study all day and the coffee shops stayed open late enough for you to get things done or wrap up that conversation. Moreover, there are plenty of board games and enough engagement in the community to make you feel like you’re at home there.

That whole vibe seems to carry over into the open-mic feel. The couch area gives way to a smattering of mics and an old guitar amp head to give it some volume. The tables and chairs get pushed around a little bit to afford some seating around the stage, but otherwise it still feels pretty low-key and unassuming. It is consistent with Bedlam’s local feel, and at least some of the artists can run home to grab and instrument and get back before anybody notices there was no music happening. Last night’s event seemed less attended as the previous one I had been to, both by musicians and by audience members. However, I did get a chance to talk to one of the musicians who has been at each one since it has started.

Here at BelltownPeople.com, we have thrown around some grand ideas of profiling various characters in Belltown to help our readers learn more about their neighbors and the identities that make up our ‘hood.’ So here’s a crack at it.

Bear in mind, I’m a geek that works on web sites–not a journalist. This won’t be an article straight out of Spin, but hopefully it’s fun anyway. 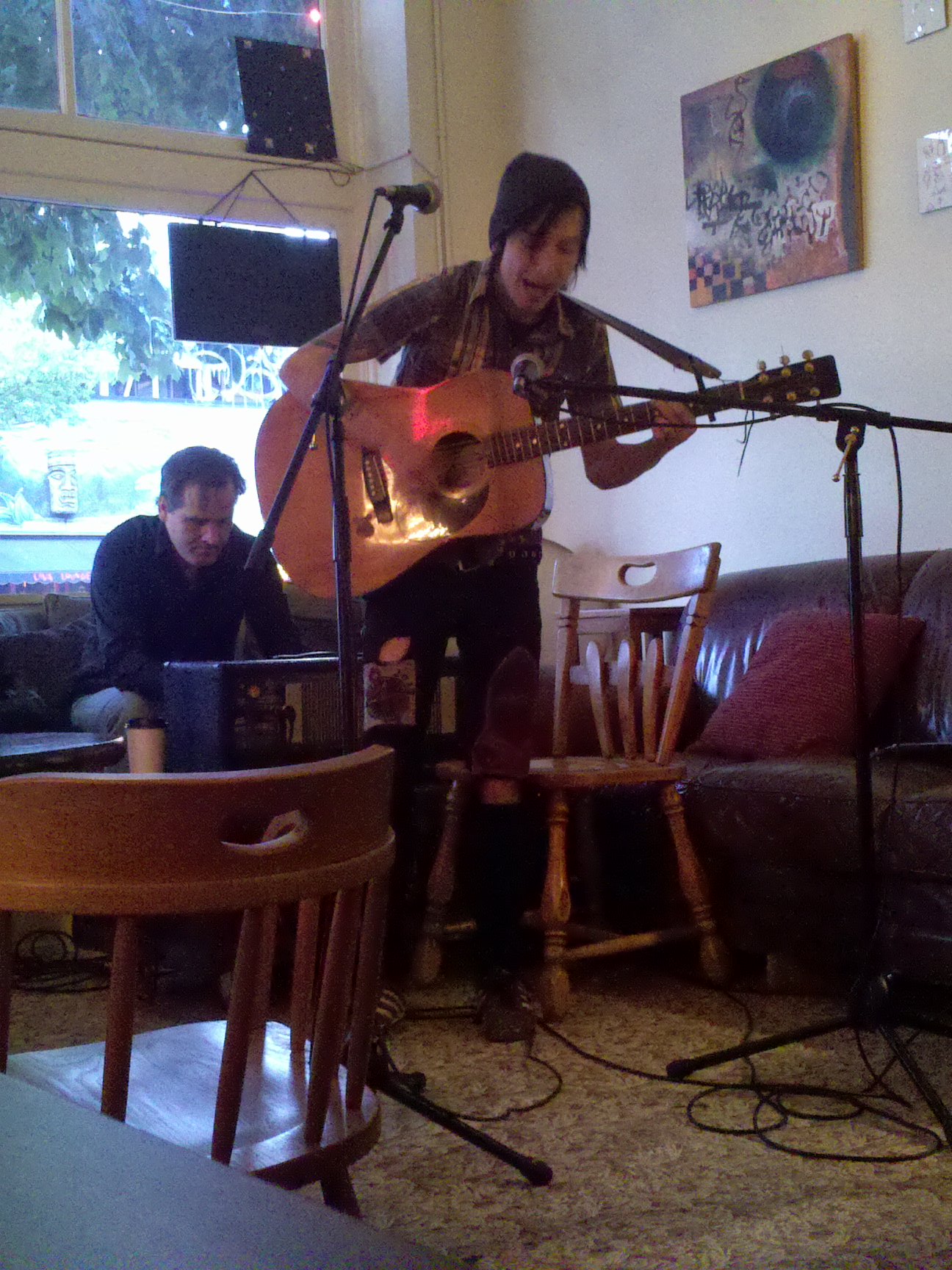 Meet Jonny from Massachusetts. He’s been running with this Radio Bedlam thing since it has started, and he generally opens his set by describing his music as “acoustic, loud crappy folk-punk.” Listening to his songs kind of feels like running the whole time, but it evokes a good mood anyway.

David: So how long have you been playing?

Jonny: I’ve been playing probably all my life. When I was little kid, I was like 5, my dad had an electric guitar and I started messing around with that. Ever since then I’ve been playing music and writing songs.

D: Did your dad teach you or what?

J: I taught myself.

D: What does your dad play?

J: He played electric guitar a little bit, but he mostly did crappy karaoke stuff.

D: So do you claim any influences?

J: Influences are a lot of politically-driven folk bands. One of my favorite bands would probably be Rosa–they’re from a little town in Texas I believe. Mischief Brews is another good band. Anything that can kind of get to you, I guess.

D: So you seem to like to write songs that carry messages, yourself. How do you come up with your material? What do you try to say?

J: Basically, like, with the society we’re living in now, basically you have control for yourself over yourself. Nobody can control you. Don’t let people try to tell you how things are and how things should be when you yourself should know how to live your own life. Living free without issues of rent and having a job you don’t like and paying rent for a place you don’t like–like I do! I have a crappy job and a crappy apartment.

D: Eh, you do what you gotta do to get by pretty much. 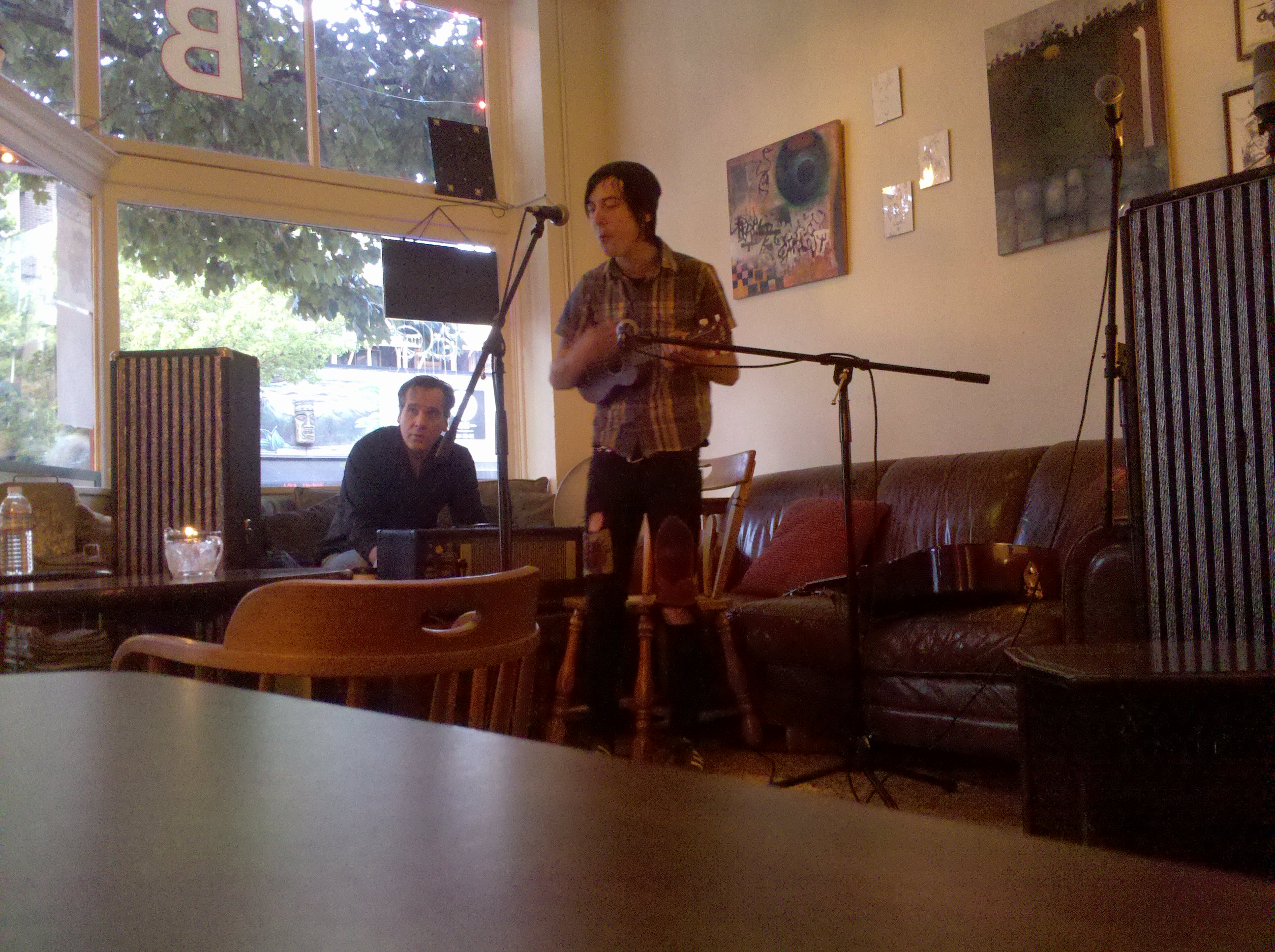 D: Cool. So do you think music is a good way to communicate that kind of thing then?

J: The best way. I believe music is an international voice that everyone knows. It doesn’t matter what kind of music it is.

D: I remember when I was younger and various artists were coming out carrying useless messages, and a lot of kids listen to that stuff. I realized music could be a powerful weapon used the wrong way. People eat that up.

J: Yeah, most of my songs have the message that you’re never alone, and there’s always someone out there that feels the same way as you do. And that’s kind of the hopeless romantic kind of music that I play.

D: What other instruments and styles do you play? We already talked about banjo and guitar obviously. 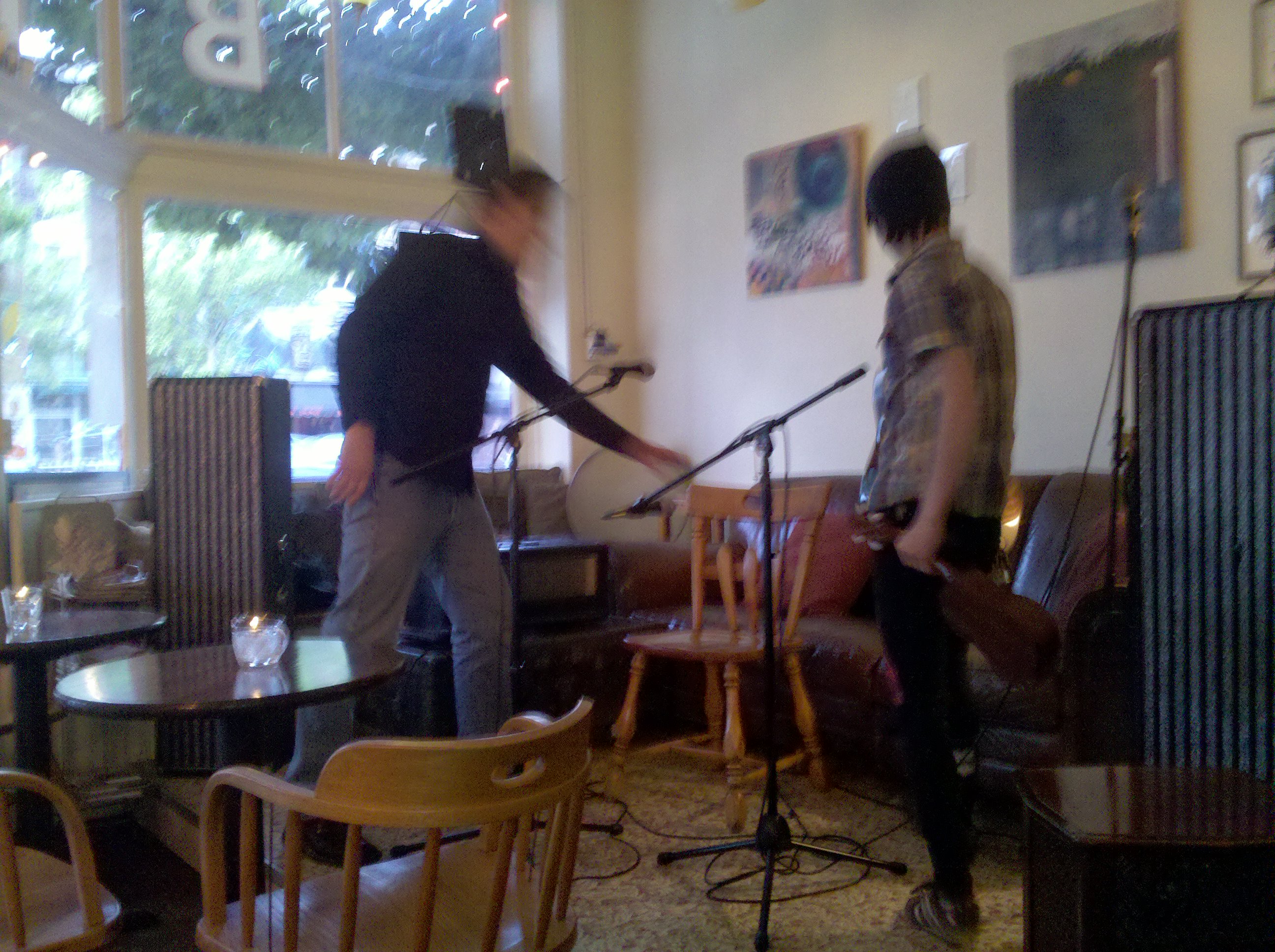 D: How long have you been in Seattle?

D: 3 months in Seattle. That’s cool. Do you feel like you’re getting your way around and meeting people and stuff?

J: A little bit. I hang out here (Bedlam) a lot, and it’s like my second home. I run into people and stuff. It feels really community driven and I love it.

Jonny has music on Last.fm and at MySpace if you want to check some of his stuff out. I believe he recorded some of his performance last night, but you’ll have to ask him about demos and the like. I shot video of one of my favorite songs he does on my phone, but the thing crapped out or something and I regrettably don’t have the video. If only I worked in the technology industry and knew how to do this stuff…

Other than that, who I can only assume was Dion Vox (found out by poking around on the Internet) from Ramona The Band showed up early on (note: I edited the article to reflect her name after looking up the band. It turns out not writing things down is bad habit). She just sang without any accompaniment. I walked in right when she started her last song, but right away I took note of her smooth voice that left you mesmerized in a sort of haunting way. I suppose if jazz ever learned how to be intimidating, then it would kind of remind me of that. I mean that in a good way, if that’s not clear. I only got to hear the one song, but I talked with her a little bit and she handed me a card before she took off. Hopefully she comes back next week and hopefully I don’t waste the first half hour napping off the work day again.

So that’s it for the Radio Bedlam write-up. If you’re a musician, I encourage you to come be a part of this event and the character of Belltown. If you like hearing people try not to be awkward and nervous as they play for strangers, you should come too!

Also, side note, but I tried a Mate Latte last night made with milk and  “Yerba Mate” tea (“mah-teh”, not “mait”…in case you don’t want to sound like me, aka an idiot). If you like Chai at all, give this a shot. I really enjoyed it.