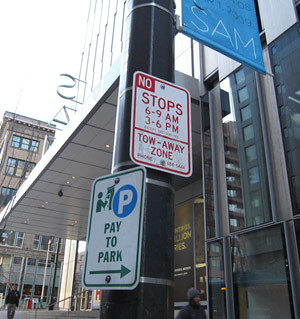 If you parked your car on 1st and are wondering where it is, you’re not alone. Apparently the tow truck drivers know a good spot to stake out hapless drivers. People aren’t allowed to park on 1st from 6-9am or 3-6pm, but that won’t stop the city from selling you a ticket during that timeframe.

Many merchants on this block believe tourists or those simply unfamiliar with downtown streets are being hit the hardest by the tows, thanks in part to pay stations that allow drivers to purchase parking through 6 p.m., despite signs that say otherwise.

Merideth Meador, a bookkeeper at a First Avenue architecture book and supply shop, has seen it all before.

“They like to say, ‘Well, I put my money in. That means I should be fine.’ We have to explain to them that that’s not necessarily true,” she said.

So, be a nice Seattlite like your inner conscience tells you to. If you see a confused tourist parking on 1st during the “no no” hours, kindly tell them to get lost 🙂