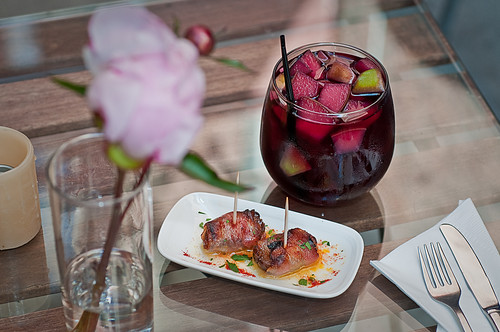 Can you eat 50 Bacon Wrapped Dates in a 30 minute sitting? Pintxo wants to know.

Pintxo is choosing contestants via Facebook, Twitter and Pintxo’s Blog. You have until May 4, 2011 at 5:00pm to enter.

Or a phrase of your choice, but must include the hashtag #baconwrappeddates, the link – http://bit.ly/mcFtuW and @pintxoseattle.

– Contestants can also enter by leaving a comment on this blog post stating why they should be chosen.

We will choose winners randomly from Facebook, Twitter and Blog Comments (each one is one entry, so enter on all three) on Wednesday, May 4 at 5pm. Two more winners will be chosen from the best post/Tweet.

For the party-goers that are not competing in the challenge, Pintxo will have happy hour prices all day, which includes half off tapas, $3.50 wells and sangria, $3 microbrew drafts, $2 Session Lager. In addition, Pintxo will feature progressive cocktail pricing. Cocktails will be priced at $4 each, starting at 4pm. Each hour the price will increase by $1.