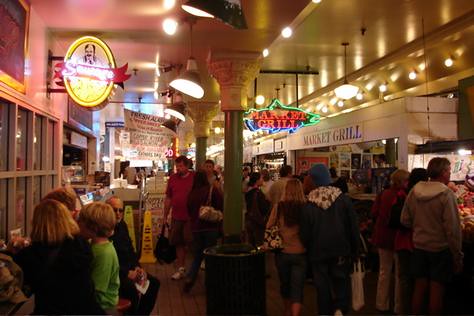 This was news to me until I read about it on Slog. Followed up by a piece in the Times. It’s always a bit of a shocker when this kind of crap happens down the street. At least this one ends with the sicko behind bars.

There, officers arrested a 24-year-old Seattle man along with a 22-year-old man and 17-year-old girl, both from Bellevue.

All three were arrested for investigation of kidnapping and promoting prostitution.

Yesterday, officers also arrested a 65-year-old man in the Pike Place Market after he allegedly tried to make off with a 5-year-old boy.

According to police, a couple and their three children—ages 5,6 and 7—were walking through Pike Place yesterday afternoon when they stopped to remove a rock from the mother’s foot cast. When the parents turned around, their 5-year-old son was gone.

Police say the mother spotted her son being led away by a man and began to chase them. The man let the child go and fled.

The woman flagged down several SPD bike patrol officers who later found the man—identified by police as 65-year-old Robert Paul Steiner—and booked him into the King County Jail for investigation of kidnapping.