Posted By: BelltownPeople Archives May 7, 2009 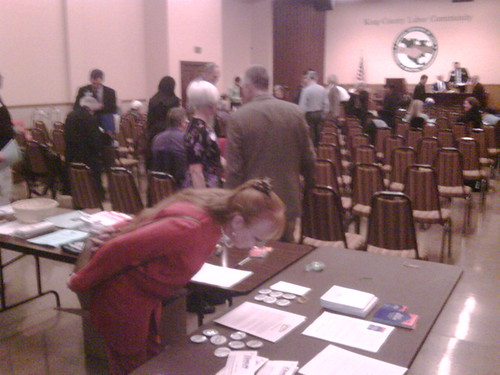 Last night the Metropolitan Democratic Club (MDC) hosted a Seattle City Council Forum at the Labor Temple in Belltown. Just two weeks into the campaign season, the pace has already picked up steam with urgent prodding by MDC hosts.  The moderator ran a tight ship, allowing candidates only 2 minutes for pleading their case to the 80+ crowd, then immediately assaulted the candidates with specific questions and allowing only a minute for each to respond.  Spoiled previously by longer, more relaxed talk formats, long-winded candidates’ arguments were blunted (talkative Rusty Williams; predictably).  Other candidates’ previously-hazy positions were suddenly rendered with crystal clarity (recitation-prone Robert Rosencrantz; surprisingly).  The time crunch appeared to hone candidates focus to a sharp point with straight positions being drawn and confidence waving all over the place (except for one uncomfortable non-answer on education from the notes-assisted Robert Sondheim).

There was a new personality on the stage drawing much attention.  Campaign late-comer Bobby Forch had announced just the day before, via Twitter, his intention of running for the already crowded position #8.  His campaign manager explained that “this is only his second day campaigning.”  Forch did not yet have a website listed, or hand-outs printed, or even listed policy positions.  However, despite starting his first public event without any of the conventional campaign schwag or reading literature, Forch came armed with unique and well-thought-out answers for each of the questions posed.  Regarding education: He started out as a school teacher and supports front-loaded (invest up-front) programs.  On public safety: Building trust is more important than keeping tabs.  On the choice between paying for either a new Jail, city-wide Broadband, or the Mercer project: Mercer should be a top priority only if the emphasis is to Invest in Infrastructure.  His #1 goal: Create a new ‘Small Business’ division in the City government.

Also running for Position #8 is David Miller who playfully joked about the personal nature of beat cops ‘back in the old days’ Looks like Miller could end up giving Rusty Williams a run for his (folksy) money.  Williams, never one to hold back what’s on his mind, repeatedly mentioned he couldn’t explain all that he wanted.  The nature of the talking format brought out some… interesting comments in his short time talking though.  Williams’ deceased mother is his inspiration (and anchor for every answer).  On the stage he said her last words were “city process is a sham.” Asked for clarification later, he said (repeating twice) that her last words were “public process is a sham.”  Williams, in an aside, also said that “the City Council is on the second floor [of City Hall] for a reason, to talk to people.”  The Councilmembers’ offices are indeed on the 2nd floor situated behind a locked security clearance door, a receptionist, a sign-in sheet, another door, an elevator, and a lobby guard.

This morning the candidates will wake up from their frantic but fun-filled forum and be right back at it, meeting this time for a breakfast hosted by the Alki Foundation (political arm of the Seattle Chamber) in the posh Washington Athletic Club.  The breakfast gathering will be “featuring Alki’s signature fast pitch, yes/no question format.”  There will be more than just City Council Candidates though.  Mayoral and County Executive candidates are also all confirmed to attend.  These faster formats are allowing for an unvarnished look into our regions’ future leaders.  Through these high-paced forums are revealed their character, policy positions, and performance under pressure.  These forums are the defining moments when Seattle’s future leaders are tested.