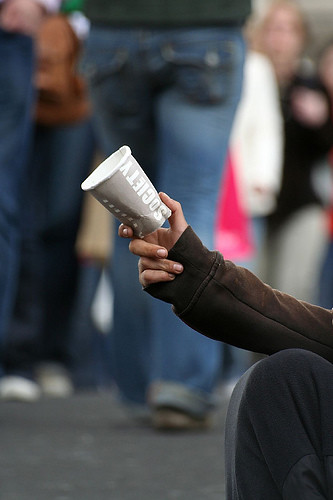 Our friends at PubliCola did the heavy lifting by attending last evening’s public forum debating Tim Burgess’s proposal to crack down on aggressive panhandling.

During a public forum at Seattle University last night, proponents and opponents of City Council member Tim Burgess’ proposal to crack down on aggressive panhandling made the case for and against the measure…

…Tim Harris, executive director of the homeless newspaper Real Change, argued that the people Scholes and Burgess wanted to protect were primarily rich condo owners. “These [panhandlers] are people who are interfering visibly with our cathedral of consumption downtown,” Harris said.

My view on the legislation is that it’s legislation. What, huh? Legislation is visibly ineffective (as all Belltowner know) to curb crime on its own. Dealing drugs, taking dumps on sidewalks, and public drunkenness are already crimes. What Belltown needs is an increased enforcement of existing legislation.

However, I believe some trust of an elected official is actually warranted in this case. Tim Burgess is a former Police Officer. He knows way more than I do about what is tying the hands of police with regards to enforcement. If this is another quiver in an officer’s arsenal of existing laws that they feel is required, then I’m all for it.

As for Tim Harris, way to go out on a limb and stereotype an entire community. Yeah, we’re all rich condo owners who wish we had a human sized hamster ball to hide in while we walk down the street. Give me a break Tim! Don’t patronize the folks who are walking these streets on a daily basis. Most of us support Real Change. That’s why they’re there. Totally ignoring the issue of aggressive panhandling and intimidation would be an exercise in ignorance.