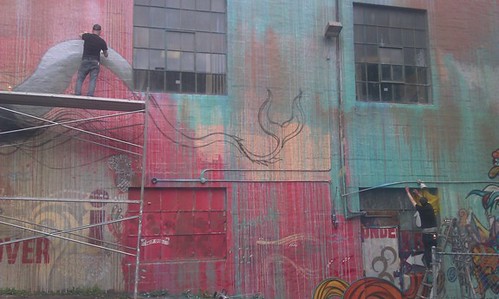 As of this week, under the lamps of a gray lighthouse, with various strange plants and creatures swirling bellow, there is a zombie like mermaid with a gorgeous tail swimming across a rosey hued wall in Belltown. On the Western side of First Avenue, half way between Battery and Wall, facing the sunken parking lot you will find a beautiful new painting. Three guys and a gal were commissioned to paint it together with the approval of LOHI (Low Income Housing Institute) who owns the building. I spoke with Nko, Ego, Japhy Witte and Angelina “Angel” Villalobos on Thursday as they tackled the final layer of their project. Most of them have painted on this wall individually in the past, but this is the first time these four have worked together (Ego and Angel have worked together a lot, and they all know each other, being long time Seattle painters).

From the street the wall looks smallish, but when you actually stand at the foot and look up you realize what a big undertaking it is to paint the whole thing, especially from an uneven and sloping parking lot! I am interested in artist collaborations so I wanted to know about their process – in fact, right near the mid point of the wall there is the word Process. I asked how the collaboration began and unfolded. Nko described a very organic (vague) process, starting with a meeting, and progressing with a lot of spontaneity and improvisation. They seem to be very relaxed, go with the flow kind of guys. I asked Ego if he made sketches to plan his designs and he gestured for me to follow as he walked around the scaffolding to the other side of the mermaid. Just when I thought he was going to pull out some sheets of newsprint and show scrawls of pen on paper, he pointed up to the freehand outline of her tail “drawn” in dark spray paint right on the wall! True improv style. I noticed him dancing while he works.

Nko described the day when he showed up and the others put him to work on the lighthouse. Each person seems to occasionally wear the director hat and generally works on whatever needs to get done next! They all told the story of how their first layer of painting was well received, all the details and objects that people could recognize in bright colors. But then they added the next layer: “washes” of latex paint from rollers at the end of very very long poles, that dripped down over everything in a lovely painterly way! And made a big mess, according to many people passing by and even some of the folks who are invested in the project. It was in danger of being painted over at one point! But it was just one layer, one stage in the design. This is a public painting process, with the dynamic of many onlookers and the significance of place in the neighborhood. These four very distinct artists have a sort of unfolding collective vision. In the midst of all this improvisation there is a vast amount of practical experience between them: they know what they are doing, even when they do not know what they are going to do next!

After watching them for a little while and talking with each of them, I could begin to distinguish their different styles and contributions. Nko painted amazing shapes that flow like hair or sea weed (he painted those gorgeous icicle like shapes on a wall on Capitol Hill). Japhy is a sign painter, with famous signs all around Seattle – especially West Seattle. Ego has painted walls all over Seattle, with one that has survived since 1996 on the bus line in Sodo. Angel is in an animal phase, and does these gorgeous bug like creatures. She has just finished a mural project in San Francisco, but this was harder because it is her home city, she said, and you can’t just walk away. She spoke in more detail about their collaboration, agreeing that they improvise a lot and that they each play different roles at different times, but she did say she is often the one to move it forward and keep them on track. I knew someone had to be organizing things!

When I spoke with them, they still had many hours of work in order to finish that day. There was talk of a ship that would be in the upper right spaces (which did not materialize) and Japhy was sitting down to try to figure out a ghosting sign that would cross the windows. The large word Suspend now brings a crisp, angular structure to the otherwise very organic painting. I asked Japhy about his hopes for the project and he spoke of his desire for “Unification,” that the wall would come together visually with all the pieces and layers working well together. I love that answer – what do we really want as artists in the midst of our process? For the piece to work out well, for it to look good and feel right as we step back and when we look back on it. 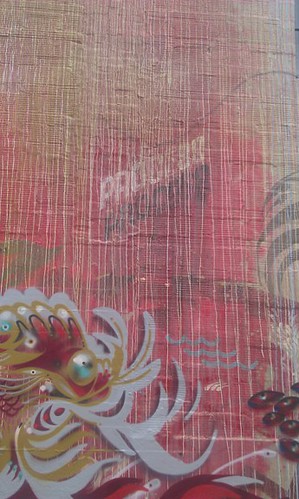 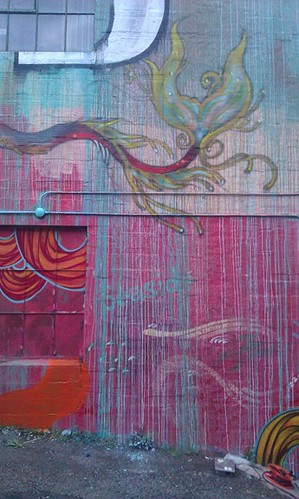 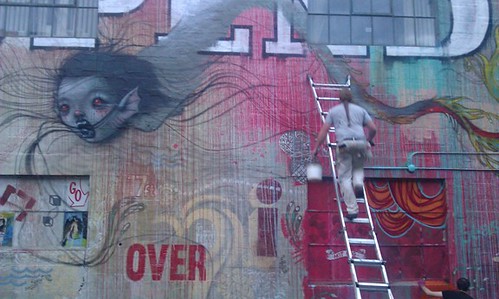 4 Comments on "Painting in Public"