There is a much maligned development planned on the northern adjoining lot to the Olympic Sculpture Park. People are generally pissed off about the addition. The main complaints are that the building’s planned stature would interfere with the current ambiance and balance of the OSP. I’d  have to agree, but have accepted that this is life and a fact of the piss poor state of modern day architecture.

The current structure was constructed in 1939 as a cigar warehouse. Today, it provides my eyes with an palatable beige barrier distinguishing the visual weight of the waves from  the encroaching 1980’s Houston architecture of the  office tower lumbering behind it.

The Seattle Times did a great job of mocking up the development. Their article is surely worth a read and gives insight into the groups who are fighting the encroachment. Only time will tell if the groups are successfully able to persuade the developers muster up some as of yet unseen architectural creativity. 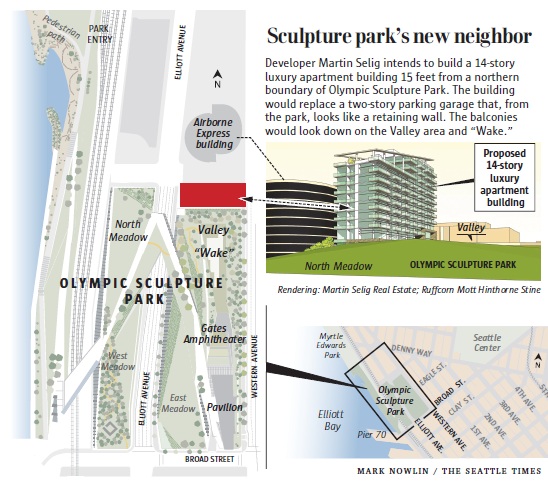