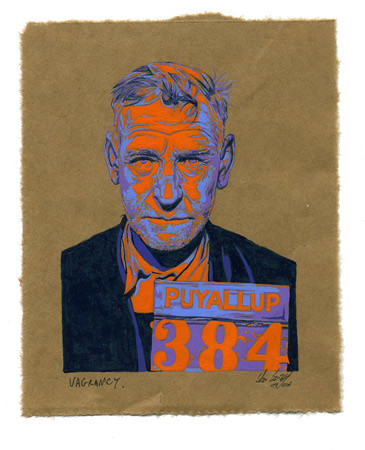 Roq La Rue Gallery, the premier pop surrealist art forum in Seattle, is gearing up to lift the curtain on its latest exhibition. This time around it’s Chris Crites with his “About:Face” artwork and Travis Lampe showcasing his series entitled “Best Loved Tales of Misery and Woe.”

Chris Crites is coming to Roq La Rue for his second show. His fascination with human faces has led him down a road of recreating mug shots of Seattle area folks who have stepped outside the law for various reasons as well as interesting and famous faces. Crites’ signature style is to use acrylics on brown paper bags, which give the art a strange yet appealing texture.

Travis Lampe is making his debut at the funky Belltown gallery with his works of misery and woe. Known for a humorous take on retro animation, Lampe has created a series that puts a darker spin on the cartoon forms of childhood memories, but in a pleasant way.

This new art showing opens at Roq La Rue on Friday, June 12 from 6 to 9pm. Each exhibition lasts for one month, so if pop art colored faces and mug shots on an unconventional canvas or shady humored retro art are right up your alley, then the Roq La Rue Gallery during the month of June is your destination.

View other events happening around Seattle at Examiner.com.