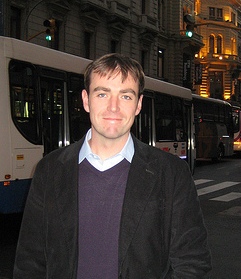 Who is this guy Jesse that seems obsessed with Belltown?

Why would anyone start a neighborhood blog?

What’s this dude’s motivation, does he really think a dumb neighblog is going to be the next facebook?

Ok, that’s a good start. My name is Jesse and first off, I’m pretty new to Belltown. I’ve lived in here since September of last year after Trina and I got married and decided we’d pack our bags and move off the Hill. So, remember, I don’t know what I’m talking about when it comes to Belltown, and you shouldn’t trust a word I say.

too much more after the jump

We still love Capitol Hill and had the fortune to live on 13th and Mercer. We felt like we were living in a small town that was air dropped in the middle of the night next to a big city. We got to know our neighbors and felt right at home strolling down 15th, enjoying jumbo shot n the darks at Ladro and afternoons spent listening to tunes at Sonic Boom. But, alas, our apartment was literally the size of a generous walk in closet. Even IKEA couldn’t make our little studio work for the post married life. And, Trina and I get restless when we get too comfortable… so we packed up and headed West – to Belltown.

We love Belltown…. at least a little. Hell, we live two blocks from church and three blocks from most of the good restaurants and bars in town. But, I was sorely disappointed to learn that Belltowner.com had shuttered its’doors and headed off into thesunset. I’ve sent a couple e-mails to the editor, but it looks like she’s moved on to more exciting pet projects. But, there’s a big gaping hole when a neighborhood doesn’t have an online community. How do we learn about what’s going on and all the minutia news that the big boys aren’t going to cover? So, instead of whining about it, I hit up the neighborlogs team and started a site of my own. Big mistake right? What did I get myself into?

But really, the thread of being human is community and relationships. I love people, too much. I was walking home at 1am last night after working way too late. I let my mind wander with my feet on autopilot. There weren’t people on the streets, cept for the scattered poor guy curled up in a doorway sleeping off the night. But, the city was dead silent. It hit me that that’s how I felt when I moved to Belltown. I didn’t know my neighbors and the city just seemed like a shell that I was using for shelter. That feeling is the driving reason why I’m excited to be running the site. It’s a damn good excuse to meet people and hear their stories. Instead of writing an article on Cupcakes, lets interview the owners and get to know them. Who cares about how much sugar they’ve managed to compress in a bite sized morsel, what’s their real story? Instead of working up a story on a happy hour, lets get to know the bartenders. Instead of writing up an article on the deluge of crack addicts, how’d they get there? How can we really help them?

And so far guys, I think I’ve failed pretty big. Our stories haven’t been about the people that live here. They’ve been about the stores and the happy hours, or comments on the crime which we all know is a part of living in a big city. So, here’s my confession and pledge. We’re going to tighten our belts and make this blog about people. Yeah, we’ll still have neighborhood news spam. But, this is going to be a place where you’ll be able to learn more about the guy running your favorite restaurant, where you’ll get to hear people’s stories about living a block away from you.

It’s all about living in community. Hopefully, this is just another outlet for that. If you have some ideas, introduce yourself at the Belltown happy hour on Thursday. I’d like to meet you.