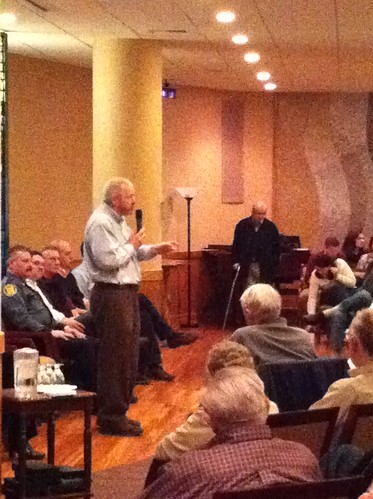 Mayor Mike McGinn held a Town Hall style meeting in Lower Queen Anne today.  The venue was Bayview Manor which is a sizable retirement community.    Most of the crowd were residents and arrived by elevator.   Seattleites from surrounding neighborhoods, including Belltown, were invited to come and say hello and ask questions.

None the questions were too difficult or unique.   They are ranged from the obligatory “What about the Viaduct?” to the more obscure “What is being done to prevent felons from entering SHA (Seattle Housing Authority) housing?

What I found most interesting were the upgrades to McGinn himself.  He’s shed some weight in a healthy way. ( I guess he really is biking a lot.)  He is also a lot less contentious and edgy than he was when he was running for Mayor or when he first took over.   He seems a lot more comfortable in his shoes these days.   Every comment is not trying to make a point in some ongoing argument.   More lines are looking for chuckles as he relates anecdotes about being a family man.

Many think Mike is politically dangerous as a single-issue and one-time fluke.   I am not a fan but, I think that misses the mark.   I think it is his folksy down-to-earth appeal that won voters over rather than his tunnel vision.  Moreover he is getting better at connecting with voters as time goes by.   This is what makes him politically dangerous.

The challenge his challengers will have to overcome in 2013 is not his position on the viaduct but his ability to campaign.