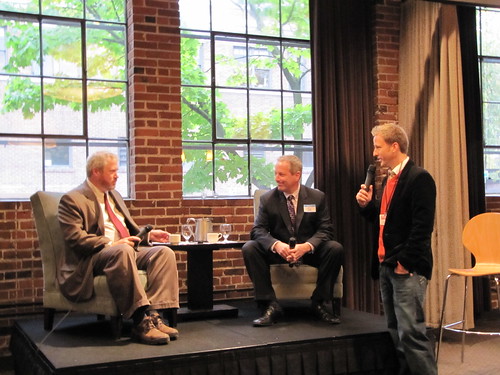 This morning at 7:45am, the Belltown Business Association held a forum at the Palace Ballroom where our 2009 Candidates for Mayor, Joe Mallahan and Michael McGinn, answered questions from the people of Belltown about the issues that most affect our community. Among these questions were the Viaduct waterfront tunnel, the bell street park avenue project, the open air drug market and safety of our streets, panhandling, and of course…the economy.

Joe is running for Mayor because he would like to see Seattle “keep moving forward”. He believes the city gov’t became inefficient and ineffective and wants to change that. He says that we cannot do anything unless we are good stewards of tax payers dollars and we get the economy back on track.  He stated that Issaquah tourists that come here each week are the most important visitors. He is very most passionate about the waterfront. He says it should be a piatza, his role model is Baltimore’s waterfront.

Mike opened by speaking about what he has done in the past, gave us information about his parent’s background in education, his education stats, and his experience. He gave a lot of background information, most of it didn’t seem associated  to the issues at hand.  He said that his focus is “how do we make smart investments in the future?”. And of course, He is not a supporter of the underground tunnel.

Debate Mediator Tim Gaydos asked the first question. He said that we believe that Belltown is the Lifeblood of the city. We have the best restaurants, retail outlets….and the best crack. Safety, open air drug market, what would you do?

way more after the jump

Joe- Said it is interesting that we[belltown] are not served better by our city. Belltown was built up rather quickly and is still organizing, and has a very affluent population. He says its a matter of priorities. Policing, public safety is a priority.  And getting appropriate police levels up in this neighborhood is a priority. He talked about the costs from the budget that this would take and said that it is a good investment and the city is failing at it.  He also said that during a drive along with a police officer, he observed that the technology systems in the police force and said that they need to be improved as well. It took 90 minutes to book someone before getting back onto the streets. 90 minutes. With improved systems of efficiency and increased levels of police force we can ensure the public’s safety.

Mike- Described the drug market initiative in the Central District and said that we should encourage more innovative ideas like this. The gist of this is basically the central district law enforcement found out who the drug dealers were in the neighborhood, built a case against them, then set up a meeting with them and in some cases their parents and informed them of the case that they had built against them and said that the next time that they were caught they would get arrested.  After that some were arrested, some stopped dealing. Mike said that this worked, that the neighborhood is a lot better. He also says that he will have a people first emphasis in the budget. The budget makes dealing with this more difficult, and that we need to get to the root causes to solve the issue.

The next question came from a business man on 3rd and Bell. You know where this question is going. He asked, How are you going to make Bell street safe, no other park in Belltown is a a good safe space, how is this going to be any different? Why not demonstrate that we can protect the safety of the parks that we already have. He also stated that the Issaquah tourist is fine and all, but we need to put a better face forward to the tourists of the cruise ships, etc. The tourists say that this is a beautiful city but they cannot believe the things that they see downtown. We need to put a better face forward not only to our own community but to them.

Joe- This park highlights how much they[the city gov’t] have failed so far in safety if people aren’t excited about a big open green space in their community. He said that we need a leader who will talk frankly, be physically present, and be there for the homeless in our community. It’s a fine line to walk. But, being a good manager while being present to the marginalized will ensure the safety of the Bell Street Park.

Mike- Investments in education, transit, etc. and not in bad investments such as the waterfront tunnel. He would like to improve 1-5, expand it. Not build the tunnel. He said that the cost of 4.2 billion is not something that he thinks is a good investment when we can invest in education and other things of that nature. There will be property taxes, most likely to us [belltown] with property nearest to the tunnel, tolls, etc.  But if the people will pay, he will do what the people want and build it if that is what they want, but he doesn’t think this is a priority in a time where police, education, etc. are needed.

Joe- Elliot Bay, Olympics define us. Salmon commute through Seattle. A long term vision should include ensuring that the Puget Sound is alive and well and the ecosystem is working. Things such as sweeping our streets doesn’t sound sexy but it will keep the sound cleaner.

A woman named Tina asked the next question. Panhandling, What is your vision for this?

Mike- All that he said was that Burgess’s plan wasn’t released yet and that the news media is out of control with speculation.

A business owner and resident of downtown Seattle, Paul Freed, asked the next question. Given that neither of you have been mayor of a major city before, how are you going to put a team around you to cover your blindspots?

Joe-bring people in that are way smarter than he is. He says that he will be his own leader, a principled leader that makes a huge difference.

Mike-listen to people, build strong teams, people who know about things that I don’t. Have town halls to get the people’s opinions, etc. He states that the biggest challenge will be to build strong teams, cultures of openness, and invite people in to help. Collaborate with communities to make a difference.

Joe-Economy and Jobs are the biggest problem we’re facing. It puts us at risk of moving backwards. He wants to be on the front line. Viaduct creates jobs and gives us the opportunity to train up the next generation of workers. The seawall is our generation’s problem. We need an effective and collaborative leader and a culture where small businesses can succeed. Leadership style and values make a good leader.

Mike- We know how to get things done in Seattle. You’ve got to make a case to the public about the viaduct. Listen to the people and that is how we should proceed. He has 20 years of working in his community and will use that.

This article is merely a summary of the notes that I took while listening today, not everything is quoted directly, but was written with the intention to inform not to persuade for either side. If I’ve misquoted or left anything out, please feel free to respond to this post below with the information that was missing.  Also, please include any of your thoughts on these issues that specifically affect Belltown that you would like to comment on. 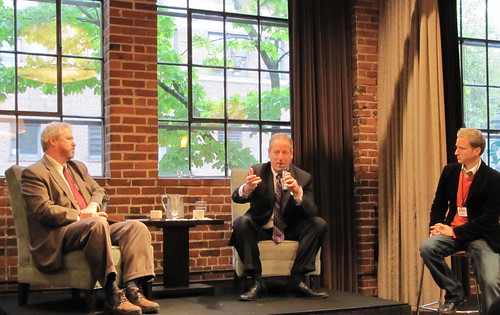 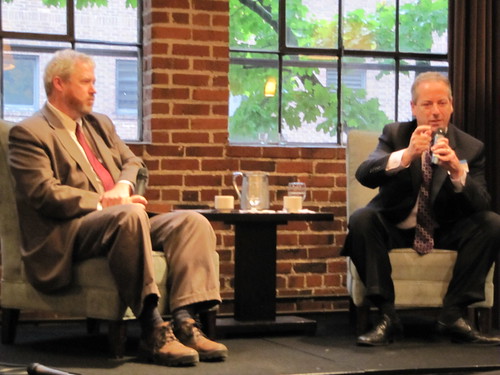