One business owner, worried about losing customers during construction of the Alaskan Way Viaduct replacement, has an idea he hopes will draw people to Seattle’s waterfront despite the disruption.

“We’ll be disrupted for a period of time,” said Hal Griffith, who owns Pier 57. “We need to have activities, people-oriented activities during that time to attract people here so we don’t die on the waterfront.”

What in the world is it about ferris wheels that symbolize bad ideas in my mind? Is is the simple mediocrity of man’s earliest invention, the wheel – just supersized for the sake of an audacious attraction? What is it about the waterfront and Seattle Center that makes my blood boil? Perhaps the fact that we’re giving away the best slice of real estate in this city to duck riding, fanny pack toting, lumbering tourists from TexArkana? There has to be a better use of space than a giant rat wheel! 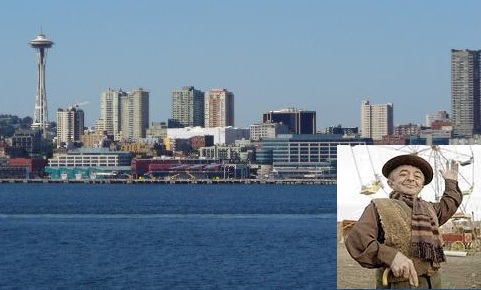 After visiting San Francisco’s ferris wheel-less waterfront, the developer made an astute observation; “The biggest thing we took away is we shouldn’t make mistakes,” Griffith said. I completely agree. “We’re excited,” said Hal Griffith. “It will be a people pleaser, one more reason to come to Seattle as a tourist.”

What about one more reason to come to Seattle as a resident?