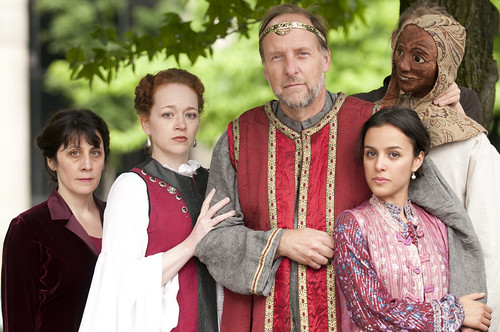 Freehold will tour Shakespeare’s King Lear, directed by Robin Lynn Smith, to unique locations across the greater Puget Sound area, July 1 – July 15, 2012. Realizing the power of theatre to bring about an extraordinary communion between audience and performer is at the core of Freehold’s mission and at the heart of our annual Engaged Theatre tour. Since 2003, Freehold’s Engaged Theatre has toured Shakespeare productions to communities in non-traditional sites. This year the tour will perform for the general public as well as for a number of underserved populations including Joint Base/Lewis McChord, Washington Corrections Center for Women, Monroe Correctional Center for Men, Harborview Medical Center and Echo Glen Children’s Center, a juvenile detention center.

When asked why she chose King Lear for this year’s tour, director Robin Lynn Smith responded “I am inspired by the human struggle to know ourselves, and the attempt to look fiercely at the truth of our existence –framed by limits of isolation, separateness, bewilderment, blindness; and the limits of our time here:  aging and death.  And it’s a great story.”

King Lear is a story of brothers, sisters, fathers, daughters and sons who have the trappings of their lives ripped away.  They are maddened, cast out, disowned, and blinded. They struggle to stay true to their bonds with family and friends, to learn humility and compassion, to forgive and empathize with those unlike themselves, and to love in the face of certain loss. They must employ tenacity, faith and resilience as they search for reconciliation and reunion. This great story of these two families poses these questions: How do we come to know who we truly are? How do we burn through pride and the appearance of things to that which is authentic in our relationships? How do we learn compassion? How do we let go of our attempts to control, deny, delude ourselves, and learn to endure — together?

Freehold and the artists of Engaged Theatre return eagerly year after year to this work for the creative inspiration it confers on all of us as well as for the opportunity to experience and share in the power and “communion” that occurs between our performers and enthusiastic audience members.  To quote, Robin Lynn Smith, Director of King Lear:

We are privileged to perform for our extraordinary audiences and have been amazed by what we continue to learn about art, humanity, identity, existence, diversity, compassion, and community when we create theatre that breaks the mold.

The production will include live musical accompaniment with a score composed by Gino Yevdjevich of Kultur Shock, set design by Montana Tippett and puppets by puppet master Annett Mateo. Cast across gender and race lines, reflecting the diversity of our audiences, this ensemble will bring this story simply and vividly to life.

Robin Lynn Smith, Artistic Director of Freehold has directed in Seattle at Seattle Repertory Theatre, ACT, On the Boards, The Empty Space, New City Theatre, Seattle Children’s Theatre, and Intiman. She has an MFA from NYU TSOA, and she is currently on the faculty of Cornish College of the Arts. Robin is the 2008 recipient of The Gregory A. Falls Sustained Achievement Award, and was recently honored by SDC, as a finalist for the 2010 Fichandler award.

Since 1991, Freehold has been a highly acclaimed center for the practice of theatre. Our Studio provides a place for actors, from inspired novices to working professionals, to train. Freehold engages an exclusive faculty of independent professional artists. Our Theatre Lab provides a forum for mature artists to research and develop new work and to re-interpret classics.