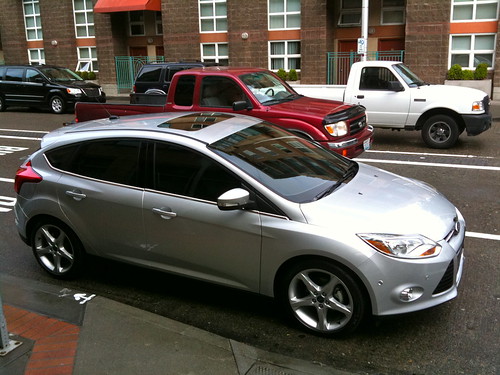 As an ex-Detroiter, I will forever have a residue of “gasoline in my veins” as I sometimes cannot help it when I see a car that catches my eye. I just have to look. Moreover, in my past life I was heavily involved in the Detroit Advertising scene as an executive with Young & Rubicam (Lincoln-Mercury) and Chrysler Corporation as National Car Advertising Manager.

Today those two loves came together for me.

In my pre-Seattle life, I spent hundreds if not thousands of hours on the set or location of car commercials and magazine shoots. I still feel like a kid in a candy store when I come across a production team, support staff, and commensurate gaggle of Police support. All of which are there to make a Car commercial.

Imagine the deja vu I had as I ran across this commercial shoot in Belltown for the 2012 Ford Focus 5 Door.

This shoot, overseen by Ford’s National Advertising agency J. Walter Thompson, was being pre-staged at the corner of 5th and Battery. The first thing that caught my eye were the 5 Seattle Police cars and two motorcycle escorts all parked around the shoot (most cops I’ve seen in one place in Belltown in over two years). I counted at least 10 of our cities finest, all there as support for street and traffic control so that the production team could get the footage (digits?) they needed.

For those of you who are curious, the majority of automobile commercials are shot between June and August each year, in order to be ready for the “Fall Launch” of the new products. It’s rare to see a National commercial shot in Seattle (they are usually Regional productions) as our city has been perceived as expensive and difficult to shoot in (location, dodgey weather, spotty support equipment, gear & crews). Recently, both the state of Washington and the city of Seattle have made moves to attract more film productions to our backyard, after losing their movie and commercial production tiara to Vancouver over the past 10 years.

A car shoot is an expensive maelstrom of activity and crew. There are the agency folks milling around, the Director and Production crew, vehicle support crew, traffic and logistics, and of course, the ever-present commissary truck. I do miss the days of unlimited bagels and lox, pastries, and coffee but my waistline certainly doesn’t.

As usual, our infamous weather wasn’t cooperating as the previous two days of shooting was in lovely sunshine, and not under our typical grey/misty cloud cover. However, my eye as an available light photographer told me that the brilliant silver “Hero Car” would look fabulous underneath the shadowless and diffused light that only an overcast day can bring. Hey, it’s Seattle….gettovaritt.

As the crew and team began to plot the Focus’ (Foci?) trip down 5th Avenue through our fair city, the Camera Car caught my eye. This is a relatively new type of rig that makes filming moving vehicles so much easier than the older flatbed trucks of the past. Following the Focus would be a 505 horsepower, flat black painted Mercedes ML55 with a huge crane and filming platform attached. It had badass written all over it. First one I’ve seen in Seattle, although they’re quite ubiquitous all over LA. This particular vehicle was from Pursuit Systems, and was a very impressive tool for the modern Director and Videographer. The interior was replete with LCD monitors, joystick controls for the camera and boom; providing the Director and Cameraman instant feedback as to what was being captured. No more waiting for dailies back at the production house to see if you captured what you had expected. While only a pleasant drive through downtown was planned, this badboy of the tarmac can reach speeds of over 150+ mph, giving the rig quite a high degree of filming options.

For me it was a great bit of nostalgia from my past to watch this production come together. It should be more fun this Fall to see our city in the gleaming reflection of a new Ford Focus.

And honestly, the car looked great. 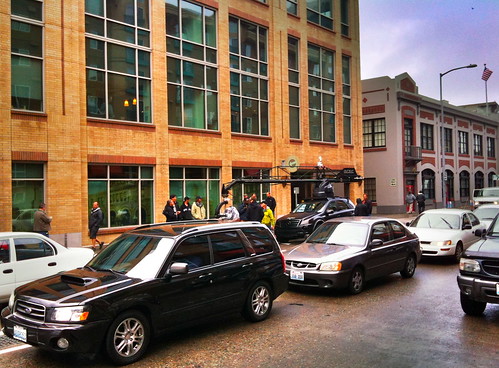 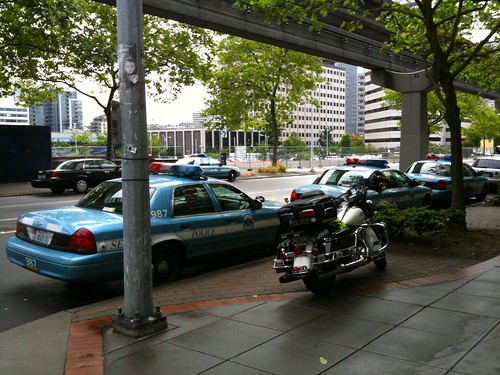 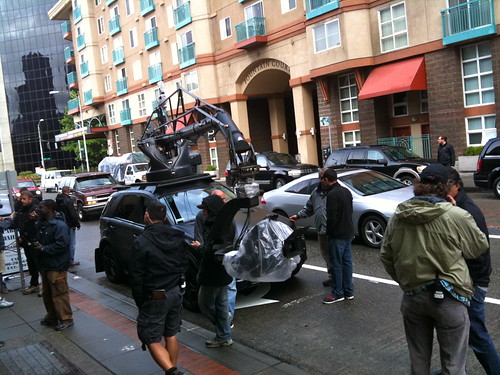 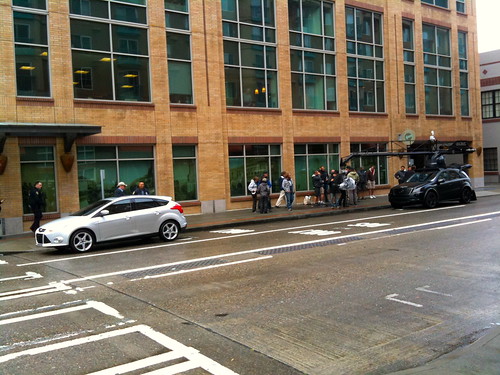