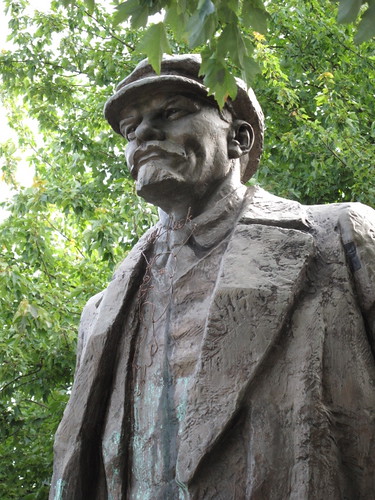 Quite a while before now I lived in Moscow, Russia. I was there when the godless communists were in charge of every layer of society. Everybody worked, everybody had medical care, everybody had housing, and everybody spent endless amounts of time slogging through their days in pursuit of basic staples in the state run shops. Everybody carried a “just in case” bag should a particular product pop up in a store for sale.  Men usually carried mostly empty briefcases and women carried string bags, “just in case.”

Everybody was extremely cautious about expressing opinions, as the legacy of informers and punishment had touched most people directly or indirectly.

Everywhere, and I mean everywhere, Lenin looked down off building facades, from park and square pedestals and up from the money in your hand.
“Lenin lived, Lenin lives and Lenin will live,” called out to remind the citizens that their sacrifice for the motherland was well worth the few challenges.

I didn’t think the Russian people would ever demand a better life!

I travelled through the wall in Berlin confidant that the East Germans would never give up that slice of power.

I read about Nelson Mandela feeling secure in my oft-voiced opinion that he would die in prison.

I never thought Idi Amin Dada would be chased from his murderous ways in Uganda.

I never thought peace would come to Northern Ireland.

Well, I was wrong about all those closely held beliefs.

When I walk along the parade in Freemont, a Seattle neighborhood, looking at a statue of Lenin I can only shake my head in wonderment, as his step down in history was an impossible consideration when I walked various streets across the Soviet Empire.

Most importantly we have the ability to educate ourselves rather than being feed government speak!
Times change.
Don’t look back wishing you had done something-