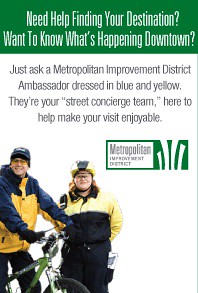 Both the Belltown Community Council and the Belltown Business Association have rejected the expansion of MID into Belltown numerous times; 1999, 2004, and 2007.

What the heck is MID? You’ve probably noticed their yellow clad bike security team mumbling through downtown Seattle. They’re also responsible for picking up trash, calling 911, and generally making a presence in the downtown Seattle area.

Metropolitan Improvement District bill themselved as  a non-profit service organization that provides maintenance, safety, and and hospitality services. They also seem to have a knack for creating pretty graphs.  Some of the services that MID provides are admirable. During the last month, they witnessed 22 crimes and made calls to 911. They also managed to cart 180 cubic yards of trash out of downtown Seattle. Sounds pretty good right? So what are the negatives?

I’ve always thought that the MID security guys jetting around downtown were kind of a noble joke. I’ve long wished that they were actual bike police officers. Glorified security guards don’t pose a real threat to drug dealers and thugs. The ineffiveness of their presence can be observed on a daily basis in Westlake Plaza in downtown Seattle.

I’m going to have to agree with the BCC and BBA on this item. Before a “non-profit” corporation is brought in to increase its’ “non-profit” footprint with a current annual budget of $4.7 million dollars the Belltown community should think long and hard. Is this REAL money better used to fund REAL police officers?