Posted By: BelltownPeople Archives May 27, 2009

Since you’ll probably already be in the neighborhood ( 2407 1st ), I’d urge you to swing by form/space atelier and check out Dipika Kohli’s drawings. You can view them through June 5th. 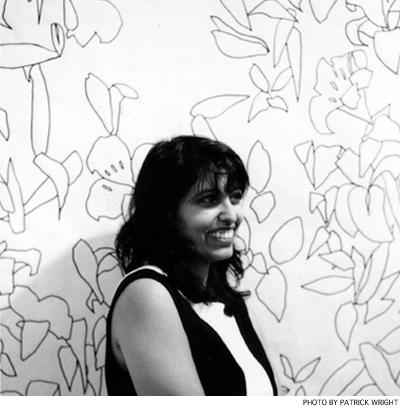 I draw lines with Sharpie markers. I like to keep things simple and uncluttered. It’s a life philosophy, you could say. I don’t own a car or a cellphone (egad!), and I draw with really basic materials. Marker. Paper.

To tell the truth, I think people overconsume. Keeping my drawings simple is one way I can say: “Hey, you don’t need to have a lot to be a lot.”

My favorite material is paper. I used to think it was canvas, but that’s changed. I like making zines, collaging paper onto paper. I put words in sometimes, cut-up stories from travel journals I wrote in my 20s. You don’t have to feel so precious about Sharpie art, either. It’s just markers.