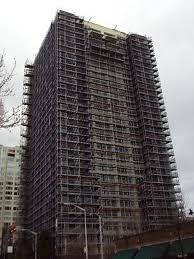 It looks like it’s for sure, the McGuire is coming down. There’s been no definitive word on how long the process will take. I imagine it will be as drawn out and seemingly misguided as the year long scaffolding inspection. I hope they’ve figured out a way to ensure that this massive effort won’t have too dramatic of an impact on the surrounding neighborhood.

From Daily Journal of Commerce

The owner of the McGuire and the contractor that built the 25-story apartment building have resolved legal questions about the decision to raze the 10-year-old building in Seattle’s Belltown neighborhood.

Officials of Carpenter’s Tower LLC, which owns the property, and the contractor, McCarthy Building Companies Inc., said they reached the agreement with various subcontractors. Settlement terms were not disclosed.