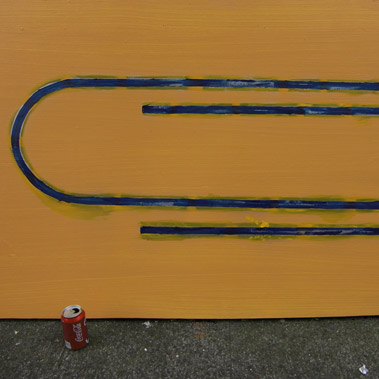 Matthew Kandegas exhibits his third and final solo show at Form/Space Atelier. Kandegas moved to Vaasa, Finland January 1, to join an intentional community of Suomi (Lapplanders) endeavoring to re-establish Suomi customs, language and culture in an urban milieu ( http://en.wikipedia.org/wiki/Korsholm ). The community has built in the city a lichen farm, which, as fodder, will sustain a herd of caribou. Kandegas will retain representation by Form/Space Atelier at the request of his collectors located in Seattle, though as of press time, Kandegas was unable to say whether he would continue to create new paintings while in Finland, but said the move to Scandinavia was “permanent and irrevocable…”.

Matthew Kandegas has been described as a Post-Minimalist painter, his subjects have been figural in response to stadium rock, but in the last decade he has created only images of paperclips. Curator Paul Pauper discovered Kandegas during research for organizing a performative spectacle exhibition of Kyle MacDonald at Form/Space Atelier in November of 2007. MacDonald is an artist and author of One Red Paperclip… , an account of MacDonald’s success in trading 14 times from a simple paperclip to a two-bedroom house.

Form/Space Atelier donated a Kandegas painting from his series Trombones Jeunes to Strangercrombie 2009, his work is also in the collections of MacDonald, Lindsey Daniel, The Low Income Housing Institute, Cascade People’s Center and several other charitable organizations.