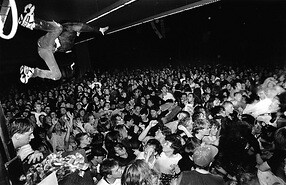 The Crocodile will host an opening reception on Thursday, October 14, in celebration of its new installation from internationally acclaimed photographer Charles Peterson.  “Come Out, Come Out Tonight” features images of notable Seattle music luminaries, miscreants, and raconteurs.

The collection of jumbo-sized prints is Peterson’s first permanent installation.

“I wouldn’t do this for anyone else,” Peterson said, noting the project’s small budget and big goals.  “The Crocodile is an institution, and it’s a place that’s filled with a lot of very fond memories for me.”

Peterson, a Northwest native best known for his documentation of the Seattle music scene, has shot virtually every artist of note from the now-infamous “grunge years.”  His work has been showcased in countless publications, featured on hundreds of record covers, and was recently exhibited at Seattle Art Museum.  A number of his photographs are part of the Experience Music Project’s permanent collection.

“Come Out, Come Out Tonight” will reside in the back bar of the Crocodile, which, until September, was home to Via Tribunali.   The wall separating the restaurant from the venue was recently removed, allowing concertgoers to move more freely between the two spaces.  The Crocodile still offers a menu of wood-fired pizza, as well as a full service bar.

The back bar is open every day from 4pm until 2am, and there is no admission fee.   It also features the remaining vestiges of the club’s original décor – a wall of colored glass windows, and vintage chandeliers.

“Even though it’s a different place now, the Crocodile will always be the heart and soul of a significant part of Seattle’s music history,” said Peterson.  “I’m proud to be part of that legacy.”

The installation features a few photographs that were shot at the Crocodile of yesteryear, including a beatific Kurt Cobain (Nirvana), and a snap of Sub Pop co-founder Bruce Pavitt leaning up against the long-gone cigarette machine, while chatting with Kim Warnick (Fastbacks).

Also included is a triptych from Peterson’s breakdance and b-boy series, which was the subject of his most recent book, “Cypher,” published in 2008 by powerhouse.

“Charles and I narrowed down his selections to fit the space,” said Kerri Harrop, Director of Public Relations and Special Events.  “I’ve had the pleasure of working with him on a number of projects throughout the years, and I’m continually amazed by his work.”

“He truly is a Seattle treasure, and we are absolutely honored to have this installation,” she added.

All of the large-sized photographs on display were printed by Peterson, in the basement of the Central District home he shares with his wife and son.  They were hand-framed by Peterson and a small crew.

“I like to think of it as a nod to the DIY style that these photos capture,” he said, laughing.  “A lot of really big stuff has been done on a shoestring.”

The exhibit’s title pays homage to one of its subjects – poet Steven Jesse Bernstein, a legendary character that frequented the streets of Belltown and its former dive bar haunts.

The opening reception for “Come Out, Come Out Tonight” will take place Thursday, October 14, from 6-9pm.  It is free to the public, and Charles Peterson will be in attendance.