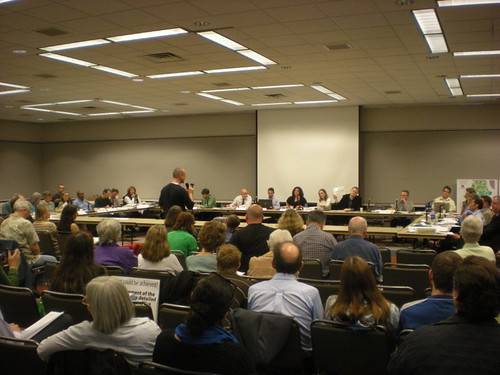 Seattle – Councilmember Tim Burgess unveiled a package of proposals this morning to address street crime and disorder. The announcement came during a Public Safety Forum hosted by the Downtown Seattle Association at the Market Theater.

“The problems on our streets are complex and require a continuum of response,” said Councilmember Burgess. “None of these proposals by itself is the solution, but taken together they will help improve the quality of life for everyone on our streets.”

The proposals include a call for more fixed-beat police foot patrols, continued hiring of police officers to fully implement the Neighborhood Policing Plan, well-defined restrictions on aggressive solicitation, expanded scope and better coordination of street outreach services and more housing with onsite supportive social services to those in need.

“I want our downtown to be economically strong and safe for everyone. That’s important to our nearly 1,000 formerly homeless Plymouth residents living downtown….

Over the past several months City Councilmembers have received numerous comments from residents and business owners about the negative effects of street disorder on the economic health of their neighborhoods. “Pioneer Square business owners and residents are very concerned about street crime and disorder. This part of downtown is teetering on the edge and the City should be forceful in its efforts to make our streets safer for everyone,” said Lisa Dixon, program director of the Pioneer Square Community Association.

A 2009 survey of city residents found that nearly one-quarter avoid downtown because they fear for their personal safety. Major crimes in South Lake Union and the downtown core increased 22% from 2008 to 2009. Retail and entertainment businesses are feeling the effects of decreased patronage.

“The nightlife and music industry want more police officers on our streets. We want aggressive solicitation stopped. Our customers and neighbors need to feel safe on our sidewalks as they enjoy our vibrant nightlife. These proposals are certainly a step in the right direction,” said Mike Meckling, president of the Seattle Music and Nightlife Association.

More information on these proposals, including a detailed summary and frequently asked questions, is available at Councilmember Burgess’ city Web page, http://www.seattle.gov/council/burgess/.