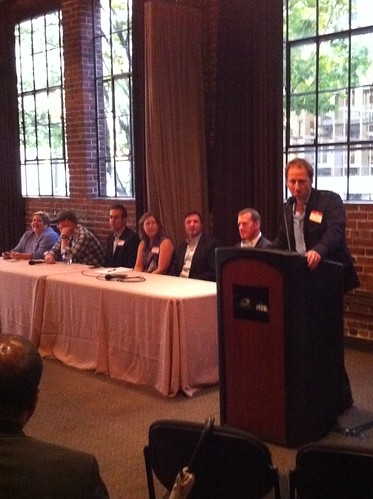 The Belltown Business Association hosted forum on the business climate tonight.   The panel of speakers included a banker, a restaurant owner, a recruiter, a housing developer, an hotelier and a realtor.  The discussion was moderated by BBA President Tim Gaydos.

Generally speaking the feeling was that the worst of the recession was over but that it would still be some years before the good times of times past return.  The last few years have forced all business owners to reexamine their daily operations and really focus on the details that will sustain or improve their cash flow.

There were also some hopeful notes.   The BBA is pursuing a unified marketing plan for the neighborhood.  The BBA has been working with the Mayor’s office to establish a Neighborhood Action Team Seattle in Belltown which is the City term for an inter departmental problem solving action group.  (Why the City needs a special task force to work with itself is another question altogether).    And 53 hotels downtown have formed a T.I.A (Tourism Improvement Area) which will tax each hotel room $2 a night to fund promotional campaign to increase off season visits.

The BBA does a good job as an organization of volunteers .  Those few, who make it happen, do so in addition to their day jobs.  It has always shocked me that so many business owners have time to work 40 to 60 hours at their business and have invested so much in them have so little interest in making the place where they are located  better for their businesses.   These meetings always result in an ask for business owners to do more and get more involved.  There is always that “Help Wanted” sign in the window looking for people to organize and build community.  Those frustrated with Belltown’s business climate need to apply themselves.