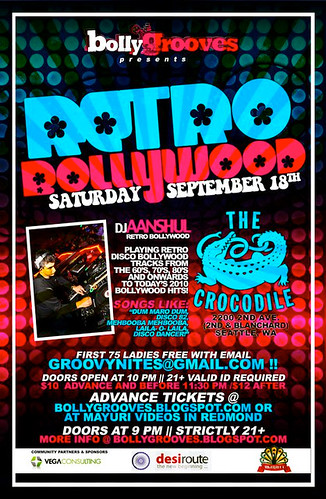 On September 18, 2010, The Crocodile will take weekend revelers to a place they haven’t likely been before – retro Bollywood.

You may already be asking, “what is retro Bollywood?” Picture this: rock from the sixties, disco from the seventies and pop from the eighties gets an ethnic twist with the upbeat stylings of Bollywood music. If you didn’t think disco or the eighties made it to India, think again.

Hosted by Seattle’s largest Bollywood dance night music producer, BollyGrooves, the event promises to be an experience like no other.

“This was a big era for Bollywood,” says Shelly Kamran, co-owner of BollyGrooves. “Before this time traditional music had never been blended with popular music from the U.S., and it created a musical revolution. People in India started feeling freedom with the music, openly dating and going to clubs. Retro Bollywood music was the original dance club music in India.”

Well-known Seattle artist DJ Aanshul will be headlining the retro party. To add to the night’s authenticity, guests are encouraged to dress in their best retro Bollywood attire.

Event tickets are available for purchase at http://www.bollygrooves.blogspot.com or at Mayuri Videos in Redmond. Tickets are $10 in advance and before 11:30 p.m. at the door and $12 after 11:30 p.m. at the door. As a special promotion, admission is free for the first 75 ladies who email groovynites@gmail.com. More information and details can be found at http://bollygrooves.blogspot.com or http://thecrocodile.com.Bottom of Form