Posted By: BelltownPeople Archives May 12, 2011 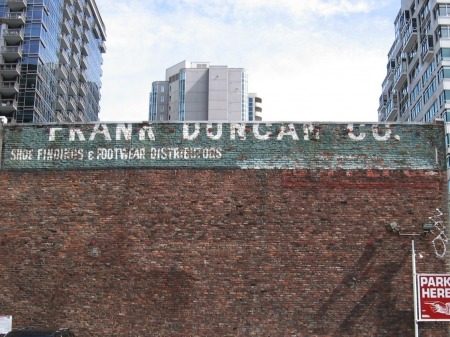 Frank Duncan Co: Shoe Findings and Footwear Distributors: The footwear distribution part I get.  But shoe findings? Well, apparently shoe findings are “small tools and materials other than leather used in making shoes” (The World Book Dictionary).  You learn something every day.  The remains of this ghost sign, which itself partially conceals an older sign to the right, are located on the north side of the Federal Army and Navy Surplus at 2112 First Avenue in Seattle’s Belltown neighborhood.  Not sure why they removed the top layer of bricks, but it’s an interesting effect.