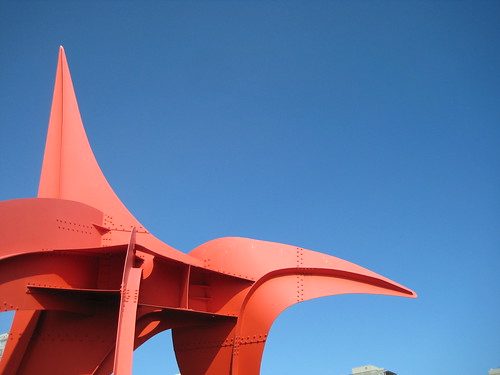 As I woke up this morning, grabbed my cup of joe, and set out for my morning walk to the Olympic Sculpture/Myrtle Edwards Park,  fog was covering the water on the Sound, and the buildings in the city were reduced to little office buildings by sight because the tops were engulfed with clouds. I walked down the street and said good morning to everyone that i saw, and they smiled and said good morning right back. And I was struck with the fact that our neighborhood is a great one.

I think that people live in Belltown because they love city living. Let’s face it, rent prices for condo’s downtown are sometimes double their counterparts in queen anne, capitol hill, and other neighboring areas. Granted, we have concierges and high rise condo buildings, but still! So it leads me to believe that we are a bunch of city dwellers that love city dwelling, that is why we live here. We grab our coffees at the local spots like Bang Bang, Bedlam, Cherry Street, Street Bean, Macrina. We grab our eats at places like Spur, Black Bottle, Mama’s, Marcos, Belltown Pizza, La Vita E Bella, Tavolata, Bisato, Taberna del Alredador, Zoe…Just to name a very few. We grab drinks at Del Rey, Twist, The Clever Bottle, Ventana, Amber, Frontier Room, Rob Roy, Cellars, Belltown Pub, Buckleys…Just to name a very few, again. We discuss and show our Art  at spots like Roq La Rue, Bedlam, and of course City Hostel Seattle. We catch shows and live music at The Crocodile, The Rendezvous/Jewel Box Theatre, Tula’s, The Pampas Room, The Big Picture, etc… And we live right here in the center of it all. So it got me thinking, if we choose to live in the middle of the action, let’s actually be in the action. Yes, we take advantage of all that city living has to offer, but do we just consume the city? Or do we invest in it as well?

I think Belltown is a great neighborhood. We’ve got a lot to offer for the person who loves city living like we do. So lets rise to the occasion and be intentional about how we can invest in our neighborhood and one another by doing things such as People’s Belltown Republic, go to the Belltown Community Council meetings, report crime when we see it, participate in the Belltown Green and Clean, and hit up the OSP Farmer’s Market when it’s in season. And let’s also get to know our neighbors at places like the BelltownPeople.com happy hour happening tonight, Bedlam’s weekly Game Night,  learn each other’s dogs names at the dog park, say hello on the streets, and be living in real authentic community.

Let’s not only consume the city but invest in it as well, helping to build a culture in Belltown that is unified and makes us a Great neighborhood to not only live in, but be a part of.