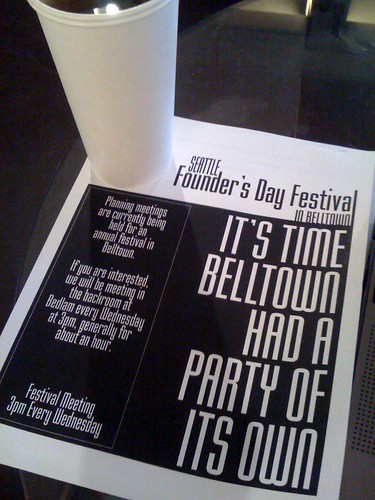 “It’s time Belltown had a party of its’ own” is the motto of Ben Borgman of Bedlam Coffee who is leading the effort to organize a new Belltown festival. I attended an early planning meeting today and the details thus far are sparse. A group of local business owners has assembled with the desire to create a festival that’s unlike any other in Seattle. Some of the ideas discussed were family friendly activities such as carnival rides as well as art themed events such as a lantern parade. And of course, there will be a stage with live music. Discussion are still underway with the city to close down 2nd ave, but that plan seems to be a long shot in which we’ll all be crossing our fingers for.

Everything is in its most infantile planning stages at the moment. What is realy exciting is to see the neighborhood coming together. If these Belltown community organizers are able to pull it off, this will be the first neighborhood wide block party in Belltown’s nascent seven year history.I left the meeting encouraged, not so much at the prospect of the festival itself. I left feeling enthused that this small neighborhood in a big city is coming to the realization that we’re a real community.

If you have any ideas of what you’d like to see at the Belltown Founders Festival come this August, leave them in the comments or swing by Bedlam Coffee and talk Ben’s ear off yourself.