Ok, I admit it. I got all swept up writing about the City Hostel Seattle project in a narrative form that I completely missed the point that there’s a ton of information that needs to be conveyed. I just got all sorts of excited. Can you imagine being a silly little neighborhood blogger, walking by the historic Lorraine hotel, and meeting this wild guy Lee? “What, you’re serious? There’s 40 something artists in there remodelling the rooms?!” Right – I frothed at the literary mouth.

The hostel is going to be amazing. This is the kind of project with a scale and impact that will probably garnish national attention. It’s such a uniquely amazing project. Speaking with Lee, you really do get the impression that this is the guy’s life work – as if somehow his entire fascinating existence (and it really is fascinating) is all culminating in this one meteoric explosion of an endeavor.

Lee is completely obsessed with the extraordinary. The front desk is going to be completely run on solar power. He’s so dedicated to the project that he spent the last thirty six hours on his hands and knees sanding the original hardwood floors on level two from an encrusting layer of acrylic paint. He wanted to save it. When he starts talking about his vision for “setting art free” he can’t stand still and has to move to another room – or, I literally I think he would combust with excitement.

Each room is going to be completely transformed from a white cube into an artist’s expression. Curating the project is Jen Vertz (who is also the General Manager for Upper Playground Seattle ) She’s assembled a diverse list of local artists that we’ll be interviewing as soon as we can. Most of the work is really just getting started. It’s hard to describe the scene as I was walking through the Lorraine. I mean, visualize yourself wandering down long dimly lit hallways, peering through doors wondering what confrontation of color would meet your eyes? This honestly seems like an ideal venue for art. Instead of moving from piece to piece, the viewer immerses themselves in the art singularly. It envelops you and has it’s way with you whether you like it or not. You’re within the art instead of externally observing with a periscope. I’m not sure i’ll be able to handle the planar dimension of canvas for a while. The building is slowly coming alive – being reborn by the art that is saving it’s walls.

Lee is all sorts of sustainable. I mentioned the solar front desk., but he’s painfully dedicated to recycling whatever he can imagine in the building. All of the old doors are going to be turned into lockers. The front desk itself is a recycled blue-print table lifted from a Boeing junk pile. The old mailboxes will get a lease on life by housing the hostel’s future library. Everything imaginably repurposed will be put to use.There will be a rainwater collection system – alleviating a couple dumps from a clean water bath. The alley way between the building is going to see life for probably the first time in nearly a hundred years. It’s going to be a narrow garden and also house a giant screen for outside movies. 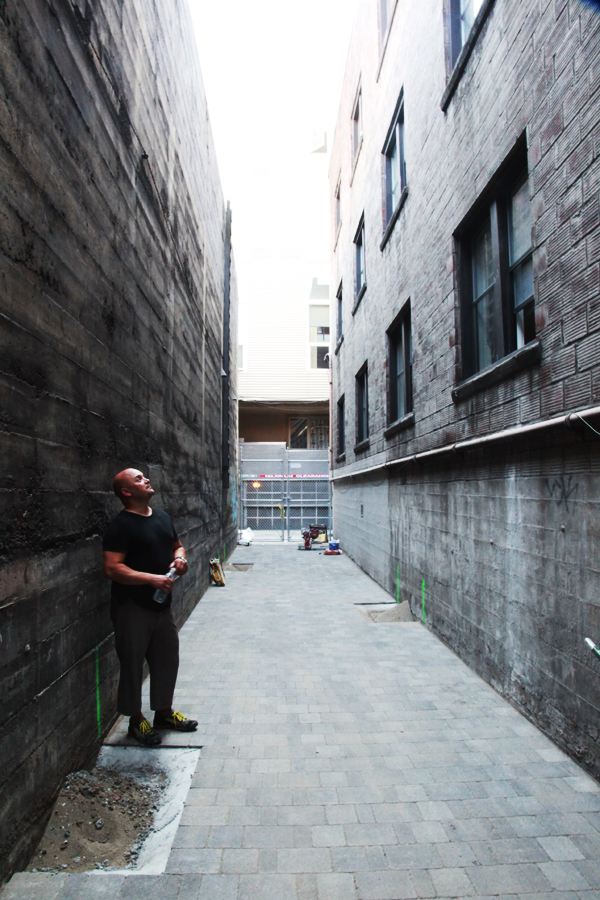 Lee himself seems to be in a parallel course with the renovation of this historic hotel. He’s lived an amazing life; underwater salvage, international hospitality, a tree topper and yeah…a waiter at Teatro Zinzani. He’s a curious and entertaining dude to say the least. But, the core of Lee remains the same. He’s a guy motivated by a passion from within that’s carried him through world travels and a life that most people have to read “On the Road” to get a taste of. Lee is maleable, absorbing life experiences and expanding his palate of imagination. He’s pouring that into the hostel with a nurturing heart that is nothing but welcoming. Lee isn’t the solo daredevil that his personality would have you believe. His “backbone” as he so matter of factly states is his wife of eight years: Nancy Gambin. She’s the captain at the wheel, and Lee is the wind pushing them along on this (cliche, but come on) incredible journey.

That being said, Lee is singularly focussed on what I have yet to even talk about; the travellers that will stay at the hostel. His creedo is to change the world one traveller at a time. Nevermind going to a hotel where you can wallow in sterile isolation. With community cooking rooms, dorm rooms, bathrooms, lounges, outdoor ambient lit patios, this screams community and a “stay that is enriched by people” feeling. It’s easy to imagine striking up conversation in the halls of the hostel a year from now. “Show me yours, I’ll show you mine” propositions of art exchange happening everywhere.

This is going to have a lasting impact on the Belltown neighborhood. Without a doubt. One can only imagine whether this will be the climatic catalyst for cultural change that I think everyone really thirsts for. But, Lee is determined. Bands will be able to stay free if they play an open acoustic set in the lobby. There will be monthly gallery exhibits featuring one of the artists rotating each month. He’s planning on hosting community events that he’s only scratched the surface of imagining. 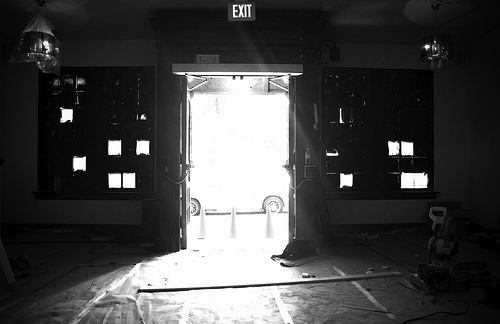