Posted By: BelltownPeople Archives May 19, 2010

I’m pretty far behind on putting together all the write-ups for the community-related meetings I’ve been covering, but I just got back from the last Bell Street Park planning meeting. Here’s a synopsis of what the design team covered tonight.

The design team had some pretty cool visuals and a nice Google SketchUp “virtual tour” through their design. I asked and I’ll be working with one of the team members to get that available here. A lot of stuff should be made available online soon. I’ll share it with you here when I find it.

I shot a quick video on my phone as the design team gave us a brief recap of the last two meetings. Again, the quality isn’t meant to be great, but hopefully this is some form of entertaining media since there is a whole lot of text to follow:

[Note, YouTube may still be processing the video. If it doesn’t work, come back and check it out later]

He explained the project originally had a budget of $2.5 million, but the proposed scope may require an additional $1 million to complete it. He is working with his capital planning staff to draft a proposal to secure the additional funds. It is important to see this park through to completion so that it doesn’t become a big fail, so it is good to hear that lots of valuable groups are getting involved.

He also reminded us of the Belltown Community Center project. Apparently, this was a plan put together back in 2000—way before my time in Belltown—that hasn’t really materialized into anything. There was $1.8 million in funds secured at the time. Mr. Williams shared with us that he had plans to reconvene the group that is driving this project to determine the needs of the community and determine realistic expectations and possibilities within the available budget.

Patrick Donohu, Senior Project Coordinator from Seattle Parks Planning and Development, moved the meeting into the actual park discussion. He pointed out the Public Involvement Overview document that was handed out at the meeting, and he especially highlighted the section that explains “How decisions are made.” I gather the point was to remind the public that their input is valuable to the direction of the project, and is to be taken into consideration by the Design Team. Another interesting part of the document is “How ‘majority’ opinions will figure into the decisions” section. The following is taken from the document.

These are just excerpts from the materials provided at the meeting. If you really think you need more, shoot me or anybody listed here a note and we’ll see what we can do. I think this will all be made available publicly somewhere on the Internet—I don’t know where yet, though.

The new plan put together after receiving all the feedback can be summed up at a high-level in these three words:

The rest of the meeting went block by block, but the design team interspersed major topics throughout the presentation.

The the North side of the street will be a 30′ section that is basically a anything-but-car space. The sidewalk space will be increased an the roads will “feel” narrower. On the South side, the sidewalk will meander in width at a minimum of 12′. All parallel parking will be on the South side of Bell Street.

We heard concepts of “down” and “up gardens” that would help manage rain flow. Since Seattle has a combined sewer system—that is, overflow storm water flows into the sound—the gardens serve to help control some of the flow into the Metro water system. There are ideas to apply some flow to the roads to direct water into gardens that would serve both an aesthetic and functional purpose. There is a lot of flexibility into how these rain gardens could work, so there is potential to do a lot with this.

The up gardens also have a potential to work as Silva Cells Silva Cells which are good structures for trees since they allow the roots to expand without damaging the roads.

Between 5th and 3rd, Bell Street has Flowering Pear trees. These trees were originally selected given the pretty terrible ecological conditions presented by the urban environment that is Belltown. These are hardy, unobtrusive trees.

From 3rd to 1st, the city planted Hedge Maple trees, which are compact and durable, and best described as “stumpy.”

Some of the proposed alternatives for the park’s new tree selections would be “civic” types of trees on the South side of the street. These trees would offer the “majestic canopy” feel. Examples include elms, poplars, london planes, and horse chestnuts. I don’t know anything about trees, but that’s what my notes say.

The North side of the street would probably get grove types of trees like aspens and amelanchiers. These kinds of trees would offer more light down in the pedestrian level which would help with the goals of activating the North side with lots of activity and vibrancy.

The lower vegetation would serve to add some texture and would include plants like lumens and high lines. Again, I know nothing about this stuff, so try looking things up on Google or something if you want to see what they look like.

Here the highlight was on pedestrian safety and lighting.

The lighting goals seek to improve lighting at night. Compared to other neighborhoods and basic standards, Bell Street drastically under-lit. There were three kinds of lighting solutions suggested:

There would also be additional lighting ideas in water fixtures, on art, and possibly on a stage area as well. Finally, the design team is talking to building owners to do lighting on building facades to minimize dark buildings within the park.

The typical block would have the pedestrian walking plane level with the street. The alleyways are going to be made more noticeable as pedestrians negotiate that space. Finally, the street would be made more of a shared space. Think of how things go down in Pike Place market where people and cars just kind of go everywhere.

This area would be much different from the rest of the blocks and serves as the focal point of the project. Most of the planned street life would happen here. There were ideas of transitioning the flat condition of the park into sloops and places to stop and get up above the road. There would also be more water features and community tables. Note the community tables—both fixed and the kind that could be brought in—were new ideas first introduced at this meeting. This would also be the community meeting space and would be the area where things like farmers’ markets, performances, a stage, and other community events would occur.

This is going to be an accessible space that is authentic to Belltown. Words like “activation”, “memories”, and “stories” were thrown around. I just wrote down this is supposed to be the place to chill. Things like food trucks, climbing spaces, gathering areas, and other community-inspiring structures would be made most prominent here. They also mentioned they wanted to make the structural edges more informal. This means kids would be invited to interact with the structure more and could be able to climb on things. There would also be design elements in things like benches to discourage people from sleeping or otherwise loitering in the space.

The last block would offer opportunities to “perch”–not linger too long—and enjoy the sunset and the view of the sound as the street starts to head downhill. This is also a place to reinforce the sluicing idea.

Sheila Klein is the artist for the park project. She lived in Belltown in the 80’s and seems to be pretty excited about the project. She took the opportunity to introduce herself and explained some of her work. I’ll briefly describe things here, and I think I got this all right based on my notes. She has over 25 years of experience in both art and architecture and seems pretty passionate about bringing that experience to the project. I apologize to Miss Klein if I screwed any of this up. Please check out her site if you really want to know more:

She seems to like the idea of putting soft mounds and green spaces rising up from the pedestrian area in the park to create sloops for eating and hanging out. She doesn’t have a defined vision yet for the park because she is waiting to see how the design and the project evolves and how she will be able to best apply her talent.

At this point, I stopped taking super-detailed notes, so I’ll just summarize major points that came out of this

We are looking at seeing construction start in Late Fall and the project may go through 2011.

Well, that’s it! I hope that wasn’t too boring.

The next Belltown Community Council meeting will be in June at the Matt Talbot Center on 3rd Avenue instead of the PACCAR pavilion.

Oh yeah: PICTURES! I didn’t take a ton, but here are a few so now you can tell your friends I’m not making this up: 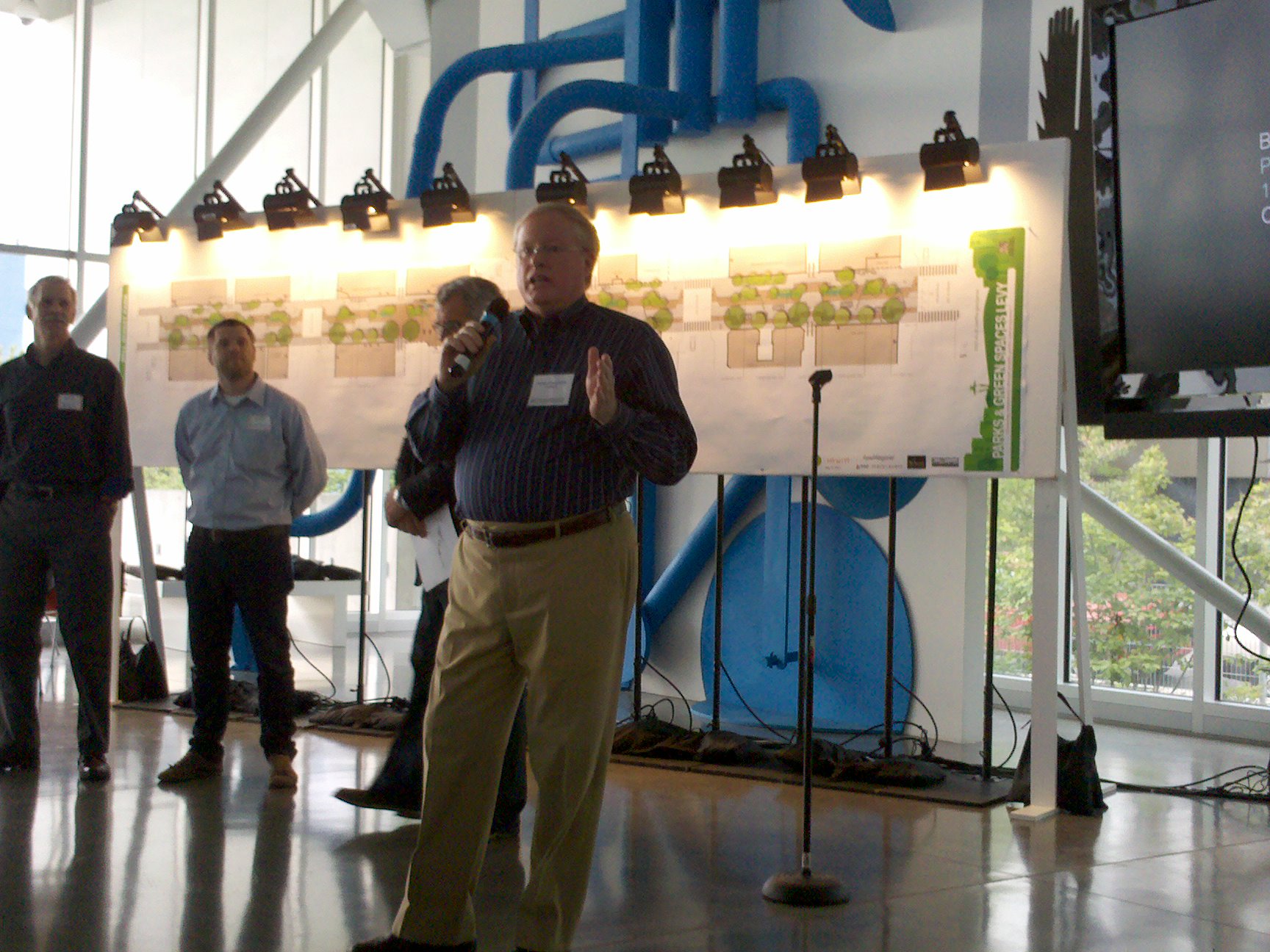 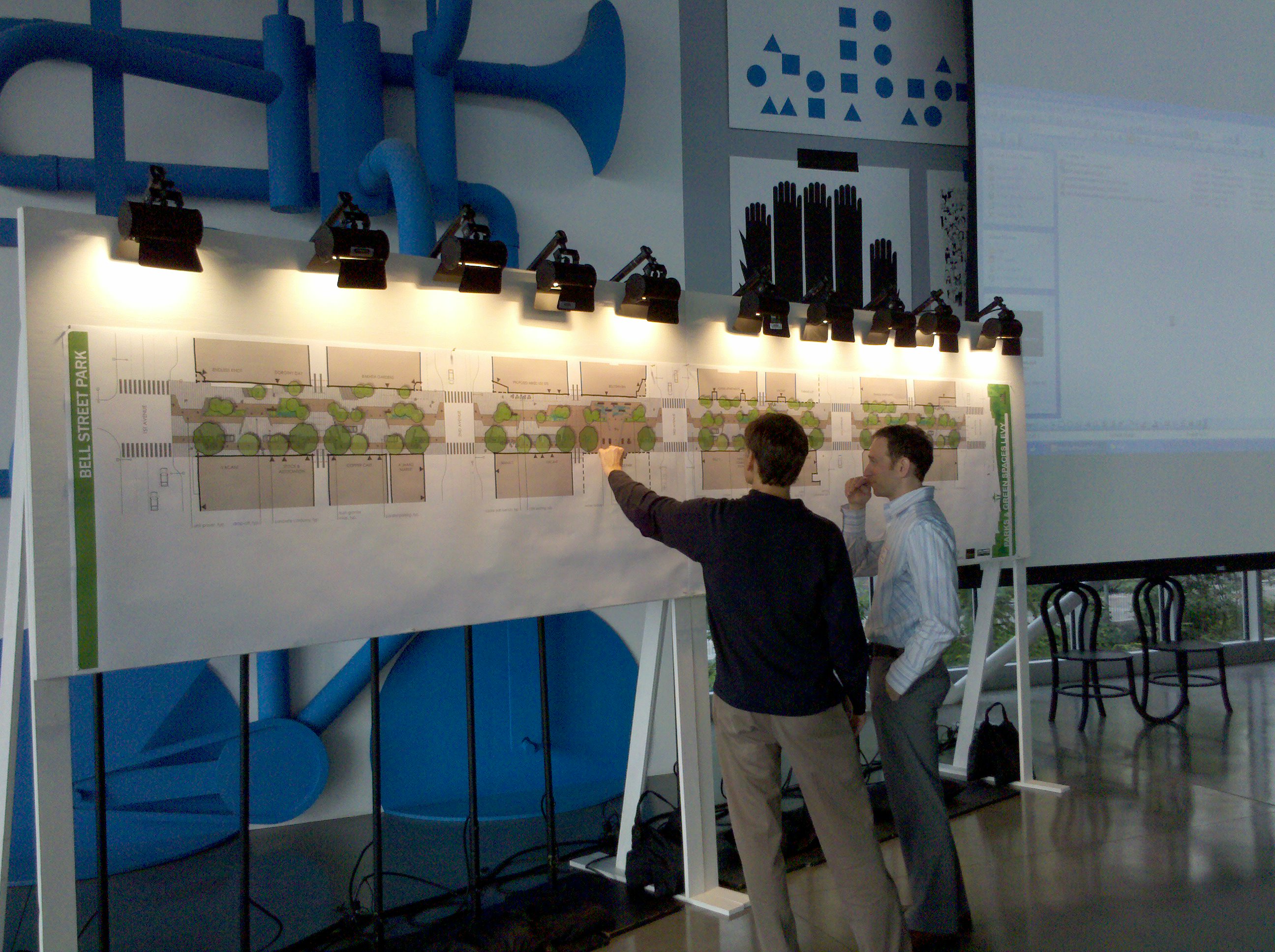 Wrapping up the meeting 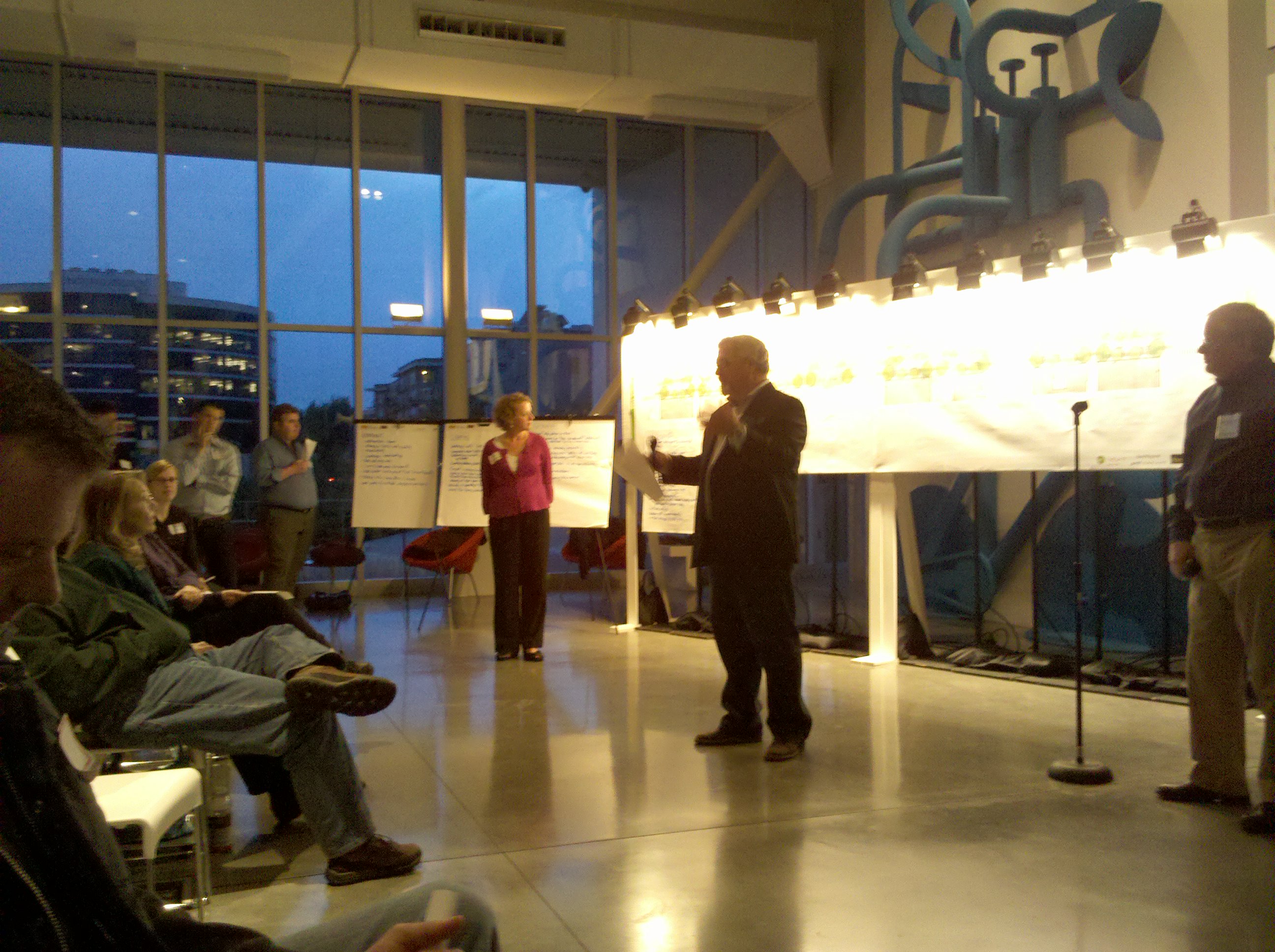