TheCookbookChronicles paid a visit to (stalked) Belltown’s new Bang Bang Cafe that we profiled a couple weeks ago. The tiny cafe is already gaining quite a reputation (5/5 Yelp) for delicious treats. Don’t take our word for it, swing by and pay them a visit! 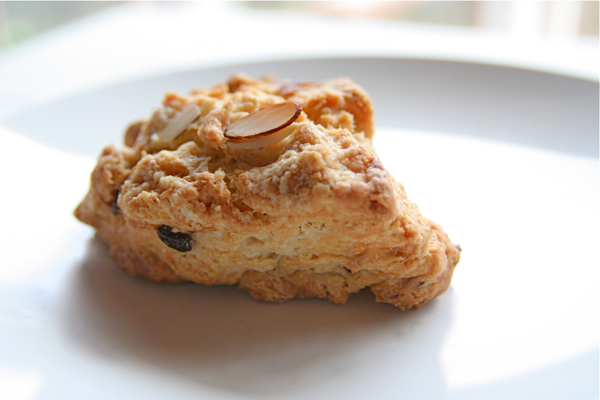 I went down there at 11am today and Miki said she had sold out of the ham scones already. So I bought an almond scone, and a sticky bun for good measure (yum). The scones are just as good as I remember–super crunchy on the outside, soft and buttery on the inside. They aren’t the almost under-baked, feather-light variety, but the type that’s got a bit more body, due to the few extra minutes in the oven that give them that glorious crust. In addition to baked goods, they also have a case full of prepared foods. When I looked up the address yesterday on Yelp, I’d read that a poster claimed Bang Bang served the “Best Vegan Mac n Cheese in the City”, and I told the sisters so. A small bowl soon appeared at my table…If you’re a regular reader on this blog, it should come as no shock that I’m a huge fan of meat. And yet, this mac n cheese was so flavorful…so, un-vegan in my (admittedly myopic) opinion.

So there you have it–my vote for the best scone in Seattle, and a thumbs up for a delicious vegan dish that you’ll enjoy, whether you’re vegan or not.

(P.S. Miki and Yuki are the sweetest sisters, and I wish them the best in their new endeavor!)