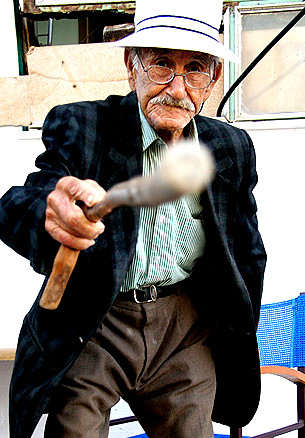 I am still disappointed from last night’s Seattle Waterfront Redesign meeting. I believe that the city has done another great job at pulling the wool over the public’s eyes. The meeting was hailed as a positive step in terms of encouraging public discourse and collaboration. However, I’ve yet to find a single noteworthy piece of actual news from the entire three hours of presentations.

Yes, there were absolutely gobs of allusions to concepts. However, all four of the presentations were thick with meaningless buzzwords and allegories of a utopian collaborative process that was obviously not happening even in the present tense.

This isn’t the first time the city has used the “collaborative blitzkrieg” process to distract  the public’s attention from a destination they already had in mind. The trick is simple. It’s a method that’s used by manipulative parents who want to avoid conflict with rotten toddlers. “Jimmy, do you want to wear the blue shirt or the red shirt today”? “The RED SHIRT”! “Gooooooood Jimmy!”. The parent has successfully patronized the small child by soliciting their participation in the decision making process, all the while steamrolling the primary objective of clothing their knee high barbarian.

The city is doing the same thing with these imaginary “design” meetings.

Please take a look for yourself. The powerpoints that the four internationally recognized teams have put together total a monumental one hundred megabytes of sheer design vapidity. Are there any renderings of these visionary’s ideas for a new Seattle waterfront? Disappointingly, No. It appears that the presenters were muzzled into selecting a series of inspirational images. Furthermore, instead of attempting to address measurable goals for a redesigned waterfront, the teams appear to have all coalesced into the muck of motivational messaging.

Instead of judging capabilities of design based upon a patronizing list of abstract free association, the public should have been presented with a concrete set of real ideas which would enlighten us to what these talented individuals could envision.

This same process of distraction happened during the Bell St. Park design meetings. The designers presented a plan A, plan B, then their final predictable plan of plan A &B mixed together. Public input was limited to vocal feedback. It was overtly obvious that the design was fixed out of the gate and that public interaction was merely a hoop to jump through.

If the city wants to get serious about involving the public in the decision making design process, then the patronization needs to stop and new systems need to be developed to consume public opinion. Show actual designs if you’d like feedback. Provide scantrons to the audience and poll them on their impressions and thoughts. Trust the public to actually see the schematics that we’re supposedly judging. Poll the public on what design aspects are most important to them and then show how those desires were exceeded during the creative design process.

4 Comments on "A Rant Against the City’s “Collaborative Blitzkrieg”"