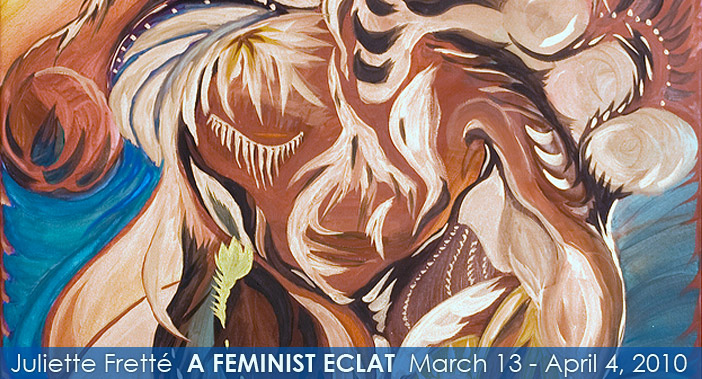 Juliette Fretté exhibits her primitivist paintings with a brilliancy or success of effort which attracts admiration or applause; eclat. Her first exhibit at Form/Space Atelier, Ms. Fretté is more widely known as the feminist columnist for Examiner.com Ms. Fretté, a resident of northern California, will be traveling to Seattle for the vernissage and is scheduled to make paintings in the atelier while she is visiting.

The organizing principles for this exhibit originate with exhibit Curator Paul Pauper, founder and Director of Form/Space Atelier. Pauper’s prime organizing principle embraces the idea of curating artists first, and the the marks artists make secondarily. As this precept applies to the upcoming exhibit of Juliette Fretté’s paintings, Pauper began thinking in terms of an exhibit by a feminist artist timed to coincide with International Women’s Day March 8th. His research into artists defining themselves as feminists led him to data about Juliette Fretté. As more was revealed during the initial inquiry, it became evident that Juliette Fretté would be the only artist capable of fulfilling the entire vision being espoused by Pauper for an exhibit by a feminist artist. Additionally, Pauper’s curation has been associated indivisibly with artists who use figuration, found in imagery of the paintings of Juliette Fretté, and in other aspects, notably Fretté’s career as a model, as it applies to the curation scheme of this exhibit.

As research deepened and broadened, Pauper established contact with Juliette Fretté, and Fretté became an equal partner in the process of building the finalized organizing principles for the March 2010 exhibit. Specifically, Pauper and Fretté established the number of Fretté’s art objects that could be most effectively exhibited, details regarding exhibit systems, framing the artwork, the potential for Fretté to create artwork in situ while in Seattle (Fretté is currently based in California), and moving the artwork and packaging and promotion of the exhibit. Artist and Curator made every effort to nurture a synergistic approach to building the exhibit.

As the organizing principles were established, Fretté and Pauper began to think in terms of establishing a narrative to support the exhibit. Pauper interviewed Fretté, included below. Additional corollary narrative is being written and will be available by the time of the exhibit March 2010, packaged together with archival materials such as previous interviews and the artist’s parallel narratives regarding her artwork.

Pauper: What inspires your paintings?

Fretté: I find that the painting ‘itch’ often gets me going in terms of creating a new piece. In terms of what inspires me, I would say that certain events in my life can definitely influence the images that materialize. As every painting is entirely improvised, the end result is always a surprise. Otherwise, I would say that my work has spiritual and otherworldly muses 🙂

Pauper: What does painting make you feel?

Fretté: Painting forces me live in the moment unlike anything else. I find that painting is actually an addiction for me — once I begin a new piece, it usually demands my attention until every detail is fully expressed.

Pauper: Who do you respect as an artist?

Fretté: I love the work of several artists. Growing up, my favorite artist was Ora Tamir, whose work is spiritual, passionate, and surreal. But my taste is relatively broad and I also enjoy the work of the celebrated pinup artist Olivia de Berardinas.

Pauper: Have Any Heroes in General?

Fretté: Heroes? Well, there are a lot of people that I respect, including every inspirational figure from Oprah to J.K. Rowling to Da Vinci to Barack Obama (and maybe Buffy the Vampire Slayer).

Pauper: Can You Think of Any People Who Need Cultural Enlightenment?

Fretté: Everybody! We all need to constantly immerse and enrich ourselves with culture, innovation, creativity, and progress.